Part two. These are a few days old but it took the editing department about a week to get that first one past the censors. 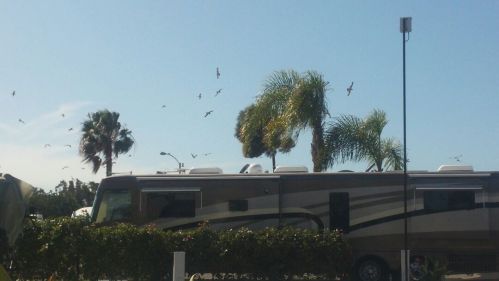 Cabrillo National Monument at the tip of Point Loma 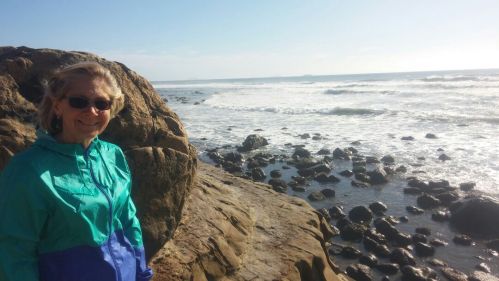 Tidal pool – well, it’s down there but the cliff wall looked more interesting 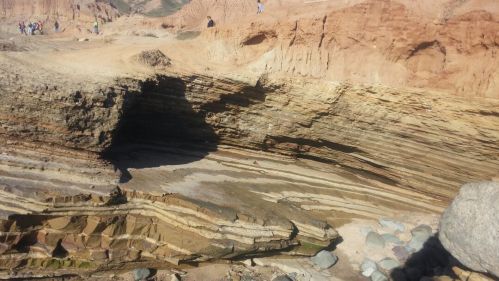 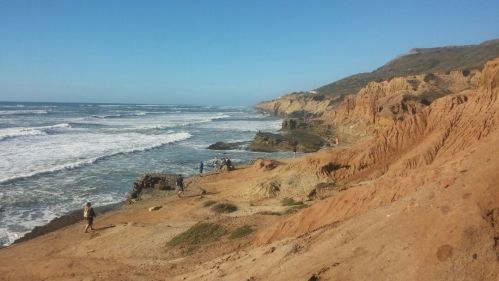 Now, still at Cabrillo NM, looking back east across the Naval Air base on Coronado to San Diego 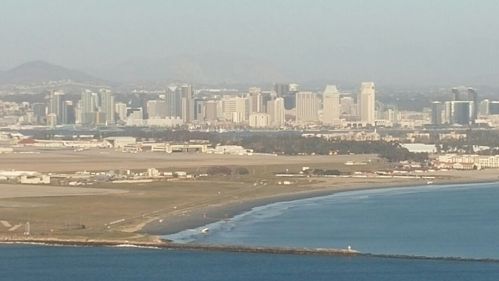 And Mr. Cabrillo, with quite the headpiece, and one hell of a sword 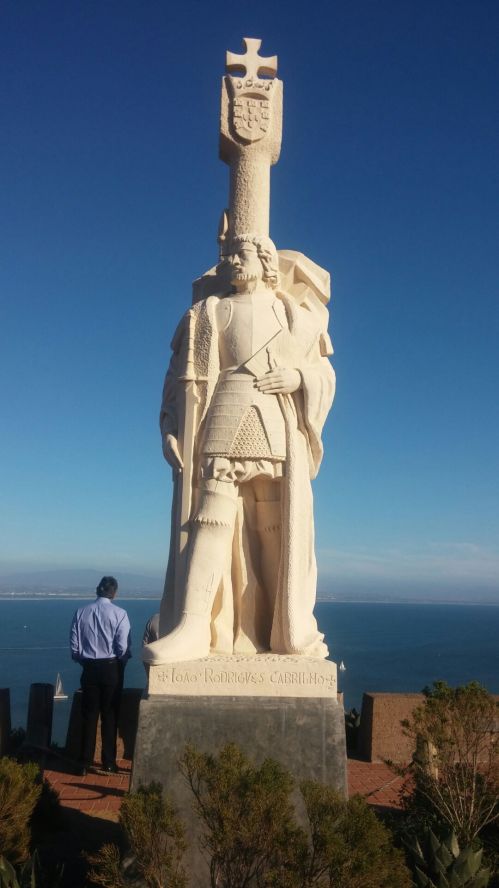 Back at the ranch, our neighbor got his new Bronco Super Bowl Champs flag. 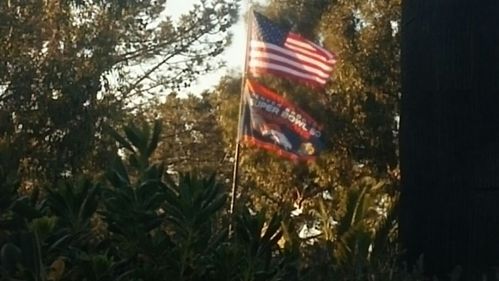 Over on the Coronado side of the bay near Silver Strand State Beach, another dog park. 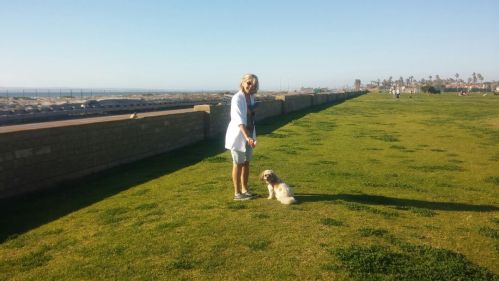 And lastly, this shirt got a comment from a 60+ on our dog walk last evening. As he passed he said, “Dark Side of the Moon. My favorite band.”

I’ll take that as a ‘like’. Same one that got all the Grand Canyon comments. 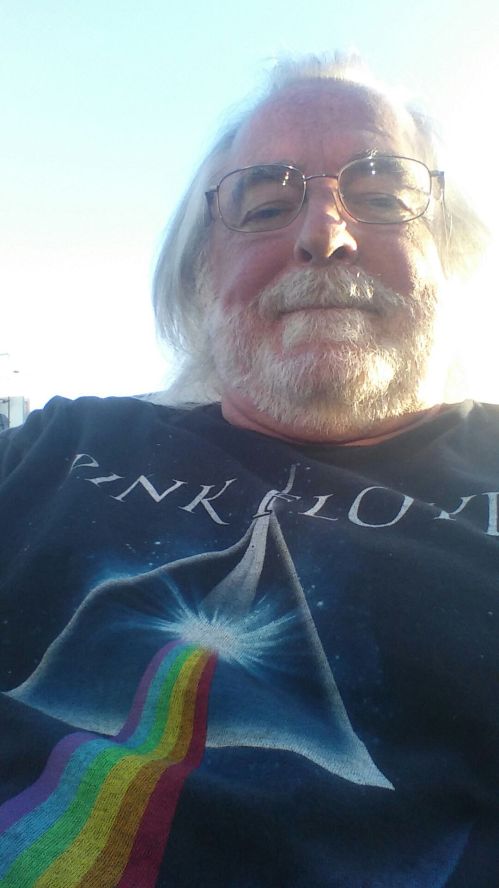 First, apologies for that last mess. It was so bad that it set off warning bells at NSA headquarters where they interpreted the typos and inanity as code for some subversive activity. A team of psychologists was dispatched and interrogated me for hours. Turns out I have three loose screws and all those years of feeding my head have left me a card short of a full deck, possibly causing the jerkoholic symptoms. They were nice enough to tighten the screws but just wished me luck with the short deck. To prevent future nonsensical garbage from hitting cyberspace they installed a feature on my phone that disables the email Send button after 10pm.

No, Denise, none of that is true. But perhaps if I start to believe it I might stop sending crap in the middle of the night. I was getting close to closing shop and referring you to Andrea’s Facebook page.

And then a phone call out of the blue wishing me a happy birthday and encouraging me to write these things. Of course my birthday isn’t until July but I’ll still take the advice. Thank you – you know who you are – and stay strong with your new endeavor. Have fun in the Audi!

So, for you who are in it just for the pictures, the misery continues. Apologies for typos and inadvertent “error-correction”.

We are finally in the perfect weather we’ve been chasing for 18 months. And we’re booked for a month here in one of my favorite cities, San Diego. To be exact, and that has always been one of my OCD problems – unless I over medicate – what a balance life is: health/fun, crazy/boring, perfect/f’d up; moderation=mediocre – we are not in San Diego, but Chula Vista, a few miles south. Exit 7B on I-5, then go west until you get to San Diego Bay. That’s where the RV park is.

San Diego has some history for us. Besides my brief stint, sort of a boys-night-out, cross-country road trip in 1976 with two friends, Andrea and I have separately, and together, boondoggled here on our employers’ expense several times in the last twenty years. She will claim she learned something at the conferences. I saved seats for co-workers at Hooters. San Diego has, without a doubt (don’t you hate when someone pushes an opinion on you, like the word ‘clearly’ drives me nuts, as in – Illinois’ budget makers are clearly useless – maybe they are but ‘clearly’ only to those that don’t need convincing), the best weather in the country. Did I convince you? How about 7 straight days of breezy, cloudless, seventy-five degree weather with no change in sight.

One of Andrea’s trips was during the summer and coincided with the Del Mar race meet. Del Mar is probably the most prestigious horse track west of the Mississippi while Saratoga, in upstate NY, the classiest in the east – sorry Kentucky. It was a bucket-lister for me so I had to make that trip. Here’s a little factoid for you on the far side of 50 – Del Mar was built by a partnership including show biz legends Bing Crosby, Pat O’Brien, Gary Cooper, Joe E. Brown, Oliver Hardy and money-man Charles S. Howard (owner of Seabiscuit). Now there’s some black and white footage.

Ah, but I digress. Seriously, if you’ve never been here, especially you west of the Mississippi where the Southwest flights can be very cheap, try it. Lots to see and do, or just sit on a beach and watch the sun set over the Pacific.

But, you didn’t come here for a thousand words. Oh, sure you did or you wouldn’t have gotten this far. We haven’t had much to photograph for a while. We stayed in El Cajon for 5 days and that area is to be avoided. The very expensive RV parks were very creepy. Now, operating out of Chula Vista RV Resort, the photo ops abound. So here goes with the pics. I have too many for one email so we’ll break it up into whatever it takes.

First stop, Ocean Beach Dog Beach, the absolute best dog park on the planet, the part of the planet I’ve seen. Acres of sandy beach separated from the people beaches by jetties. 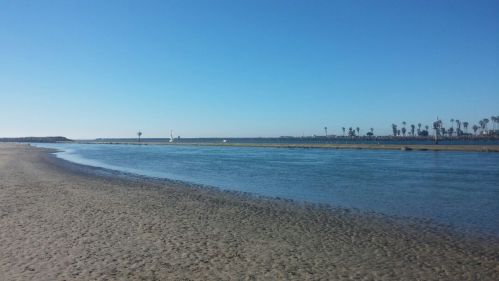 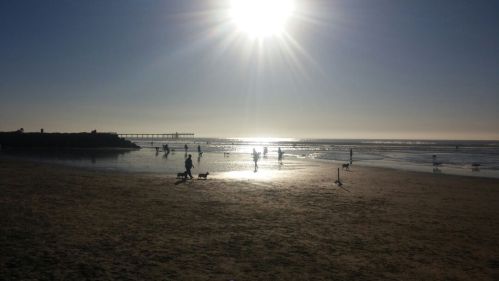 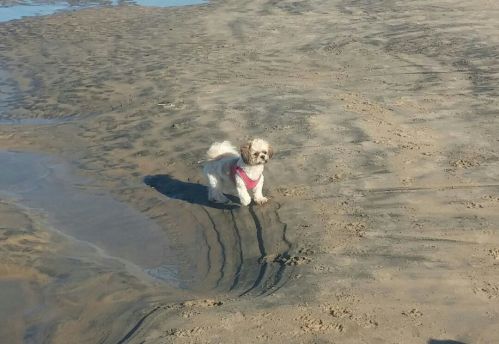 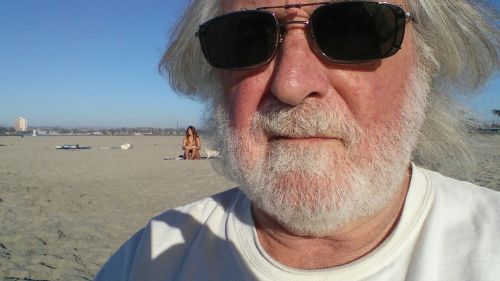 From Bayview Park, right in front of our RV resort, looking south toward Mexico, 7 miles away: 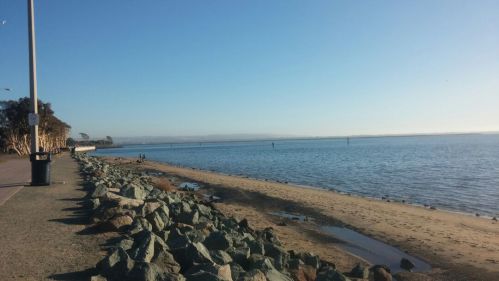 The Coronado Bridge. Coronado is technically an island connected to two other isles by tombolos (look it up) and Imperial Beach to the south. It appears to be an isthmus but somebody thought it would be neat to go with tombolos. Wonder what it cost to document that. At any rate, The Hotel del Coronado resort, with beach, is open to the public. Go buy yourself a $15 umbrella drink and look at pictures on the wall of Marilyn Monroe from the movie, Some Like It Hot, filmed there. We’ll go over one of these days and take some pics. Coronado is also home to Halsey Field, a sprawling Naval Air Station. They were conducting an exercise a couple of days ago with helicopters passing overhead every few minutes, F-15’s and transports all day long, and – you don’t see too many of these – a couple of Ospreys, the twin engine vertical takeoff and landing plane. I like planes. Naval Base San Diego is just 5 miles up the shore from here on this side of the bridge. The bridge had to be built very high to accomodate the fleet.

Half mast for Justice Scalia: 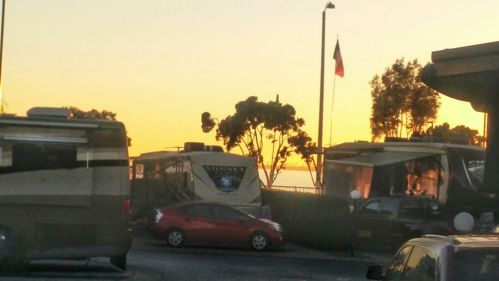 From the roof, looking out to the bay. 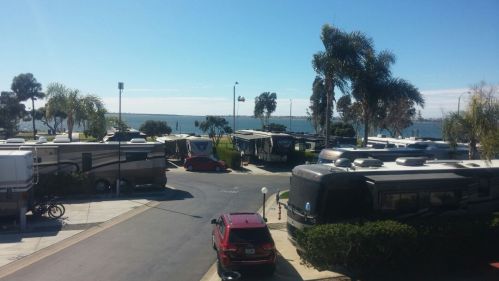 And finally, a cloudless sunset. Meh. 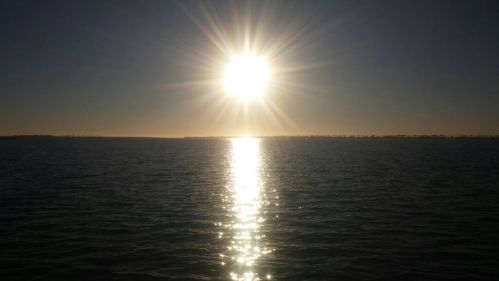 Will follow up with more from Cabrillo National Monument.

Wait, I got a ‘like’ on today’s (Saturday) t-shirt while picking up mail: 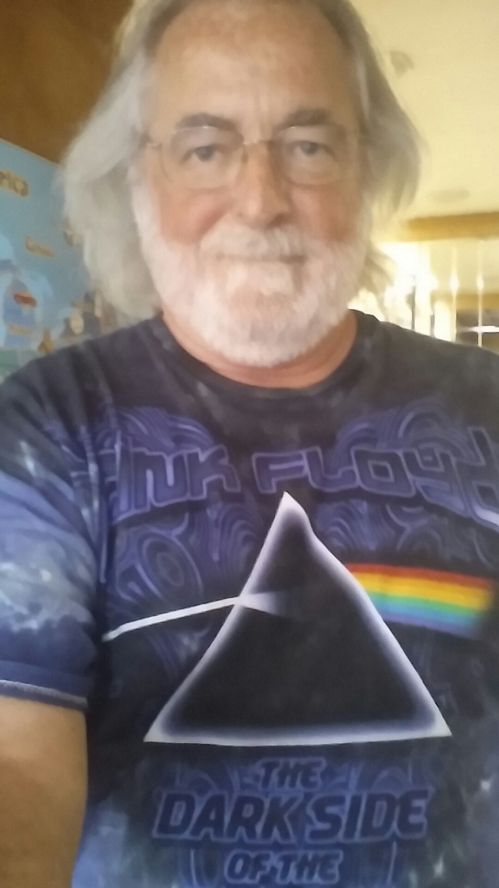 Break in some rules here but WTF, it’s New Hampshire break the rules. It’s after 2, Tramadol in effect, zolpidem kicking in, sorry, no pot, and alcohol wearing off. So hear we go:

The eastern hill of KQ Ranch revealed a beautiful view into the ruggedness of the national lands to the east. But at 4500′, we had enough of the cold and snow. So last Wednesday we bolted to the lovely nowhereness of 1300′ Sundance Meadows of Aguanga, CA. Part of our network, this is a free seven days. And not bad if you like private and peaceful, and like looking at horses. The campground is empty except on weekends when Billy Bob and his crew of 4 RV’s, 20 people, including kids and folks our age, introduced a whoofin’ music system pouring out tunes like that heart felt classic, ‘My brother’s new twins are my nieces from my sister, Oh, Lord!”. And except for a half hour on Saturday afternoon when the seniors were let out and the music master allowed a half hour of a classic rock station, it was more of the CMA award winners like “Three Peckered Billy Goat Where You Be? Thirty-Three Percent Says You Nail Me?” Yeah, that one becomes a tough visualization when the refrain is repeated 25 times, “I love Billy goats nailin’ me. Bahhhh! Bahhhh! Bahhhh! Bahhahhiteme! Ooooooh That hurts”

The third photo – you can see My Palomar

OK so the weekenders and their genital injuries left Monday. Quiet and warm Tuesday. Beautiful night for stargazing but nothing going on.

Tuesday, laundry day. We haven’t had contact with human beings since Sarurday. We’re not sure that its a good idea anymore. But we sure scared those fuckers off.

We did find a little property that sells metal animals down highway 79 a but, or is that, The 79?.

Tomorrow we head for El Cajon.