Bye bye Long Beach. We didn’t like it. To be fair, we didn’t really see it. My fucking hip planted us. Actually, one day we drove up to Hollywood to see the big sign

and walk on the Walk of Stars.

It was a disaster. As soon as we got out of the Hard Rock parking garage it started raining.

Then, to get the $2 rate we had to get our ticket validated. Just buy something anywhere. Bullshit! Just buy something in the Hard Rock Mall. Andrea left food at two counters when they wouldn’t validate her ticket while I tried to keep out of the rain with Luna and pretending I could walk. We thought NYC was a tourist madhouse, and we worked in mid-town Manhattan – Hollywood Blvd is worse. Unless you absolutely have to get a picture of the Zsa Zsa Gabor star, just drive by. Or, better yet, don’t go. Watch Jimmy Kimmel. 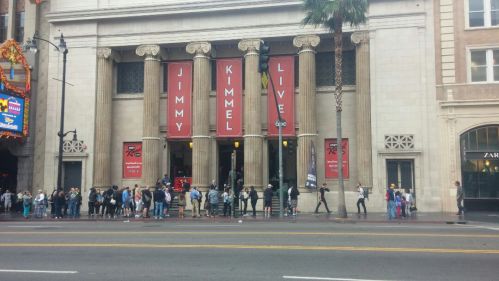 He puts people on the street. We did see a Spider-Man and a Captain America but we couldn’t get out of there fast enough.

The RV park in Long Beach was off an inlet in the harbor. 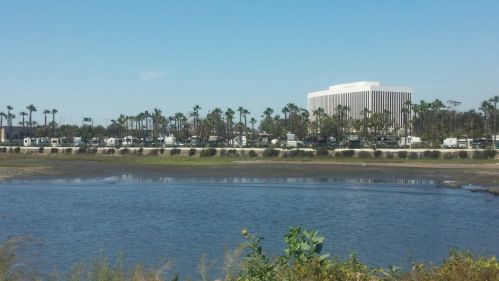 If my fucking hip wasn’t such an asshole we would have ridden bikes to the beach and walked to the Queen Mary. I was able to walk Luna far enough to get a shot of the big boat.

That was Thursday when Andrea went to lunch with two friends from high school at a restaurant in Beverly Hills. In the meantime, after Luna dragged me out to that spot for the Queen Mary pic, I searched and found a Tilted Kilt. Not really. It just happened to be in the same shopping center as a BevMo, a chain of “real” liquor stores. I got priorities. The problem with liquor being available in every supermarket, 7-Eleven, and gas station is the variety. Extremely minimal! But, the drive through the kitschy little shopping-beach street gave me a good look at the locals. Besides a number of surgically enhanced traffic-stoppers, there was a bikini walking down the street and an untold number of long, straight blond haired lookers. The women were pretty hot too.

Anyway, we left the big city and with multiple traffic hangups, a 3-4 hour drive became almost 6. Some of the drive was right on the coast.

I know, taking pictures while driving is probably not a great idea. You know what makes it worse – knowing the person sitting next to you is going to give you shit for playing with your phone while driving. Come on, I just took this 42 footer through a load of awful traffic and asshole drivers. Did I mention California drivers? Well, I come from NY so some of the shit they pull doesn’t surprise me or piss me off that much. I Am impressed by their penchant for speed. At one point in our drive near Santa Barbara, there were three Porche Carreras in front of us across three lanes. That was a picture. And those people drive well. It’s the wannabes in the Camaros that want to prove to everyone that they have big dicks. I have to hand it to even the Honda drivers, these guys can speed with the best of them. That reminds me – one last word on the subject – Long Beach, in the area by the aquarium right next to where we stayed, they were preparing for an E Formula race, electric cars. Protective fencing and bleachers were being raised everywhere and guys with name tags were all over. Glad we left. I can’t imagine anything more boring than watching silent cars pass by every minute or so. Well, there’s tennis. And the all time sleeper, sorry Artie, golf. “So, Ernie, should he use the 3 or 4 club here?” “I don’t think so Bert. I like the driver on every shot.” Are you fucking kidding me? I get playing it. Kind of a big boys knock hockey. But watching it? Stop it! Watching porn is more respectable. Speaking of, one of the few porn flicks I’ve seen was at a good friend’s batchelor party, and we watched it with….come on (I didn’t mean it that way, you filthy minded pig), with a priest. True. Isn’t Life Strange. A Turn of the Page. A Book Without Lights. Unless With Love We Write.

Man, that was one long tangent, upon tangent (see chapter 9).

Anyway, we are in Pacific Dunes RV Resort and Riding Stable in Oceano, CA, about a mile from the ocean. They didn’t have our name with an assigned site waiting in the late-arrival list so we pulled into a spot up on a hill overlooking the dunes. Seems nice here. Nice sunset. The only plan we have is to go to a hospital with MRI equipment Monday if my fucking hip doesn’t get better.

To throw it away

To lose just a day

The quicksand of time

You know it makes me want to…

One response to “Movin’ On”