Left off with the two year old in a Pink Floyd shirt looking stoned. Wait, looking at me liked I was stoned. Friggin’ error correction.

We drove to the next suggested spot called Swinging Bridge, again getting lucky when somebody pulled out just as we were about to give up and go home. Been pretty lucky in life. But I knew that. The nuns told me when I was 6. I could have been born with the cannibals. Ah! Teach ’em fear from day one. But I digress. The view of Yosemite Falls was supposed to be pretty good from the walking bridge. It was, but it was also pretty good from the other million points where the other tourists were. Then it got interesting. I was using a very nice cane to help with those moments of knifings and electric shocks. Walking over the bridge we decided to meander off the path and follow the river toward the waterfall in hopes of another bridge just ahead, a shortcut back to the car. Alas, along the river and through the woods to Grandmother’s house we did not go. We ended up at the Yellowstone Lodge. If we had carried a map of the park it would have been easy to figure out how to get to the car. I had had enough walking so Andrea headed back to the car along the road we thought we had abandoned. Oops. Wrong road. As I sat on a rock watching Yellowstone Falls crash over and over and over – I could have sat there forever – a good Indica would have made it more fun – Andrea got misdirected by park rangers and an hour later walked back to me. Where the hell are we? In the lodge they suggested we get on the shuttle. So, first shuttle was full of zombies and we couldn’t get on. Next shuttle didn’t show until a half hour later, a few minutes after we figured out that we were not that far from the car via the first path we started from. By then my hip had enough rest to be dragged back to the car. My guess is the original quarter mile walk became about three miles. So much for restful recovery. But the pics were good: 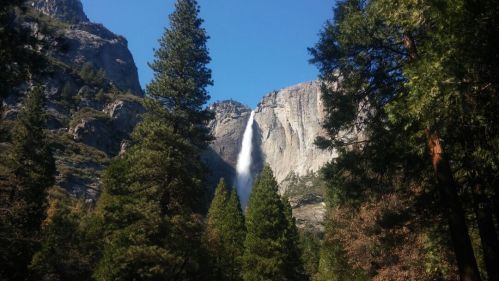 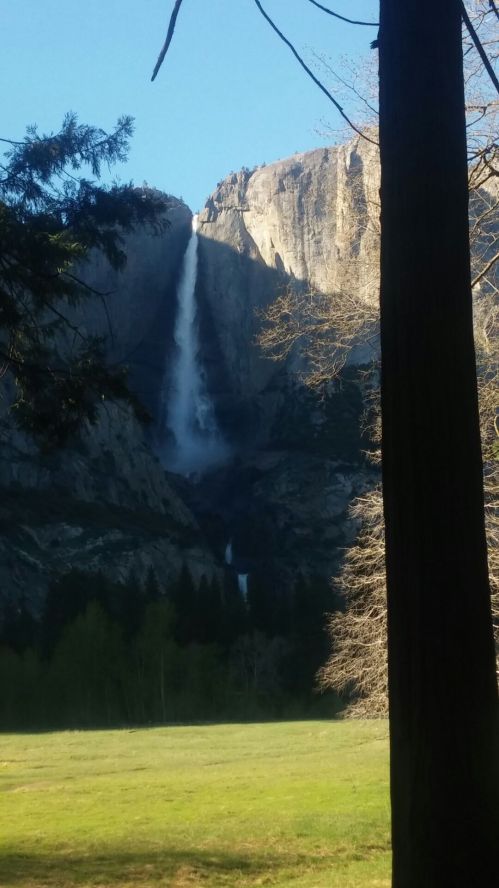 If you like the same waterfall from different angles.

After finding the car we just wanted out but we were only about a quarter of the way into the valley.We kept going to Half Dome:

At which point we ran into two million drivers on a one lane road. Before dealing with more pansy (no offense to you pansies out there) drivers on 41 South, we stopped at an overlook just outside the big tunnel and got a last look: 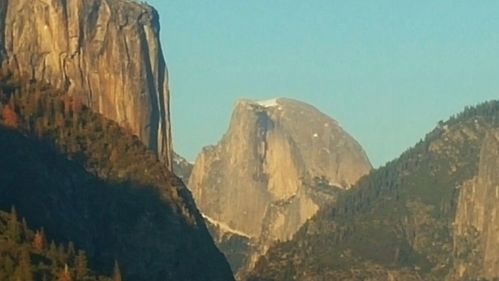 If and when you go, avoid May-Sept, any weekend, and especially National Parks weekend. Better yet, sit back with something that floats your boat, and rewind the Ken Burns documentary.

I often leave out interesting drives because we don’t have photos. We had no idea the next 130 miles were going to be the most difficult in Odyssey history.

Hold on. Watching news as I’m writing. Anybody recall seeing this guy on CBS news, Major Garrett? He’s current. First of all, what kind of name is Major? I want to name him Trigger, or Mr. Ed. You know, you stick your face out there in the public eye and you might get a few of us taking a close look and wonder if he’s going ‘nay’. Some of us have this sarcasm gene for which we need medication but instead share notes. Maryann? And ten seconds later on local Reno TV is the CBS weather person (gender suggestion female) who looks like Flicka. I deserve a cruel death by The Foot. She lived two houses down with Shirl. Yes, you’re right. I am a bad person. You ever feel bad that way when you finish making fun of someone, someone pathetic (after you’ve had your little chuckle?) Good. I’ll see you in hell. (From Unforgiven quoting Little Bill as he’s about to have his head blown off by William Munny).

One more. Hey, I’m not taking any drugs except massive amounts of Aleeve and Tylenol, but I have another idea that I’ve been thinking about. A new national anthem. Nobody can sing the current one well. Don’t we all wait for Bouncie or whoever, to miss a note? Can you sing it? OK, Jill, you probably can but that’s one in 80. But can you sing ‘All You Need Is Love’? Of course. It starts with the horns that sound so much like the beginning of an anthem. And like the current anthem or pledge of allegiance when you go ‘blah-blah-blah’ through most of it, you can do that with the Beatles song, and then pipe up when you know when to sing the chorus. Anyone out there want to take the lead on this? Carol? (Uh-oh, 4 Carols on the list. You know who you are). If ever there was a political cause I’d sing for, this is it. “Nothing you can do but you can learn how to be you in time. It’s easy.”

“No where you can be that isn’t meant where should be”.

How many would like to change the national anthem to ‘All You Need Is Love’? Raise your hands.