July 1st. Do we care what day it is? Do we ever care? Do we have healthcare? Canadians do. Why not us? Stow that awhile.

On July 1, we drive the famous Going-To-The-Sun Road. Looking at the photos from a week ago, I really don’t know which ones belong to which date. So, in keeping with the new America, where bullshit and truth are interchangeable, go with the flow and pretend reality and perception are one and the same. (We watched a 60 Minutes segment earlier about Alzheimer’s, so, when it seemed like they were talking about me the whole show, I just blamed it on 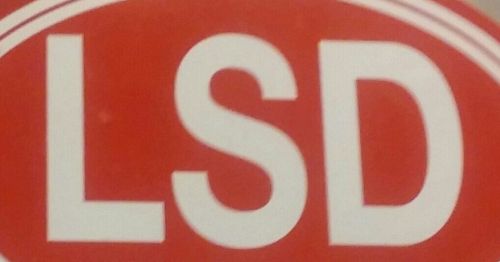 flashbacks. Hah! Another bullshit story they threw at us. Flashbacks, that is. Or did they put it in the water supply at Fort Polk? Or, did I?)

A nice view (you can believe this one):

And then, waterfalls everywhere: 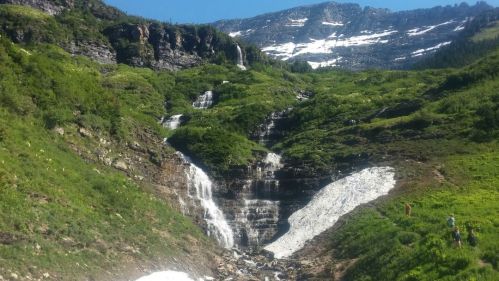 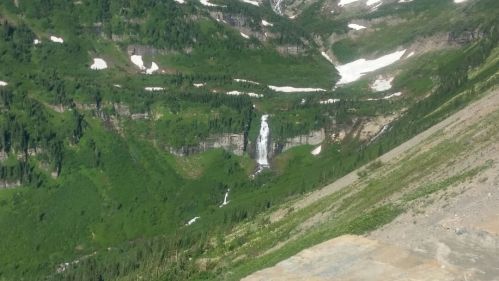 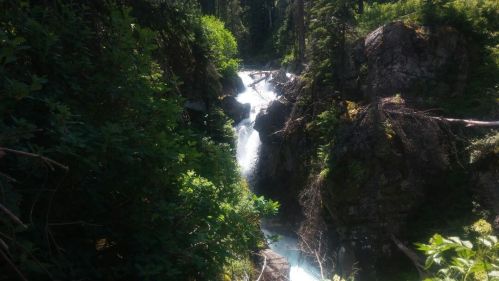 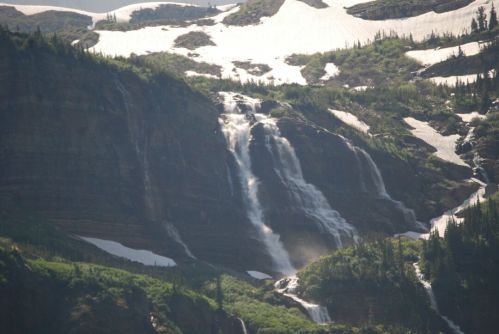 On July 2nd, we went back to Many Glacier to take a boat ride to the other side of the lake that we had hiked around two days before (where the moose almost goosed me). It was combined with a guided hike and another lake. After lake number one, they made us bust our asses going up a hill to get on a boat in the next lake so we could get closer to a glacier – at 90°. No fucking global warming, my ass. The best part about our “tour” was our charming guide, Elle. Jeanine and Andrea had already warmed up to her, and, hoping to slow her death march down upon the return trek, I gave her a well-received, chocolate tootsie-pop. You know, you can buy single flavors on Amazon. I know. After that, Elle was, basically, “our” guide, moving at our pace. Hey Jeanine – can you forward this to Elle and send me her email so I can add her to the list?

Anywayyyy, I digress. I think this is July 3rd: 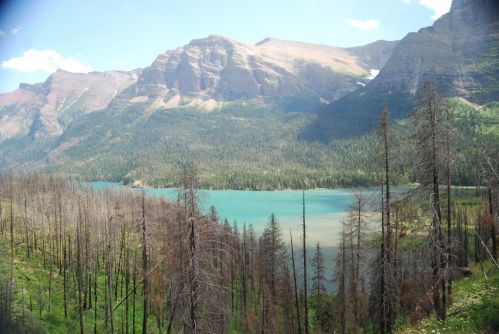 On the way to, yes, another waterfall. Check out Andrea’s biker headpiece and and a flash of purple hair: 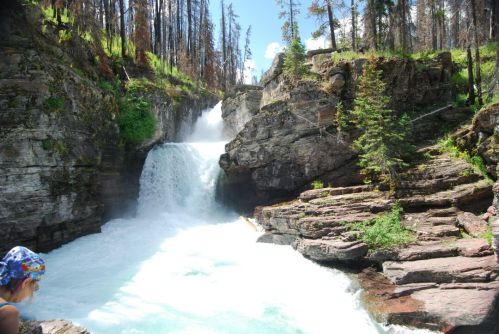 What else? On the 4th, we escaped the heat of the lower 48 to the heat of Alberta, Canada. And the nights kept getting longer. In Banff, the sun set after 10 and real night just didn’t show up in our waking hours.

Until you go west to the mountains, Alberta is a huge farm: 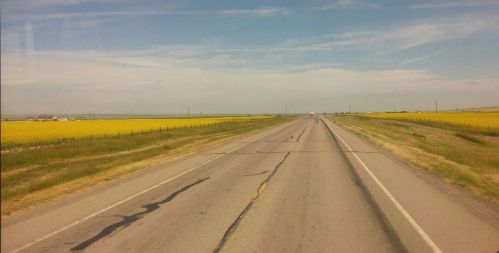 Glacier was beautiful. Banff was like Glacier on steroids. Glacier doesn’t really have a single “town”. Banff does and it’s like Vail, Breckenridge, Park City and every other US ski town thrown into one, times 5. Prices, too.

But I’m tired after another long driving day. Got lots of Banff photos. See Andrea’s posts.

First stop, the Many Glacier section of the park. That was about 10 miles north of our campground and the St. Mary section. Not far after turning into the park the scenery was everything: 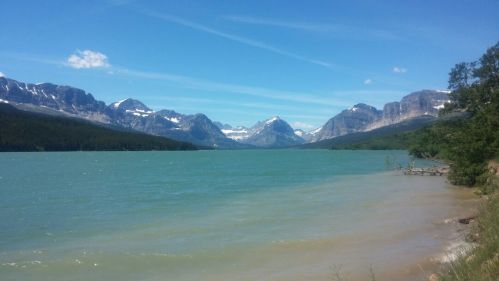 One turn in the road after another: 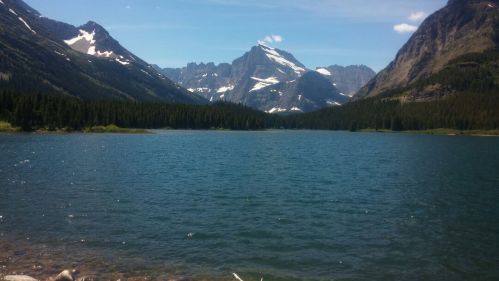 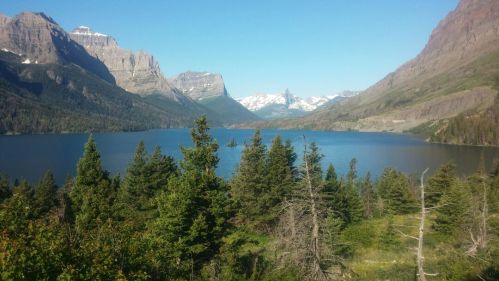 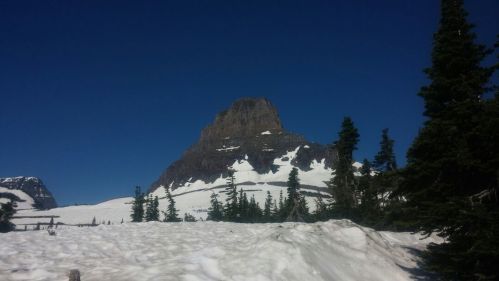 We hiked around a lake and Andrea was in wildflower heaven: 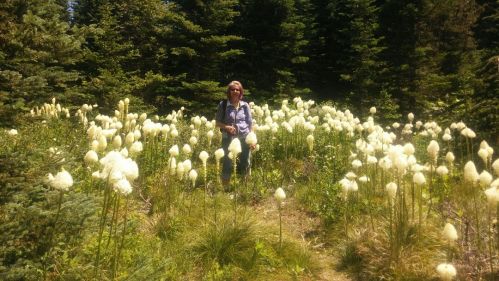 And then we thought the Clown in Chief had hit the button. You know, lots of old Nike and Minutemen missles in these parts:

Halfway around that lake, we hear a rustling in the bushes and suddenly everybody’s yelling at me, “Behind you!”

And there she was: 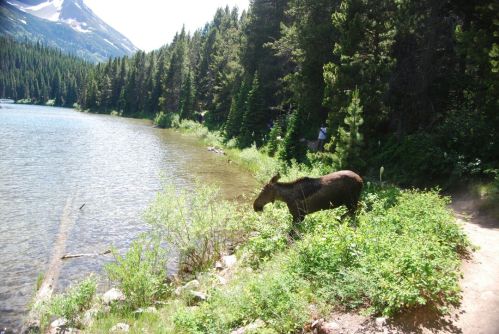 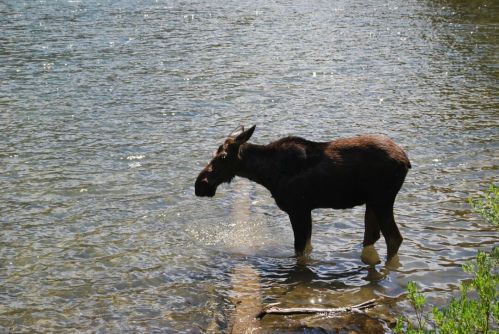 On the way back to St. Mary, we stopped at a restaurant, Two Sisters, a funky place with license plates and stickers from everywhere decorating the whole place. For you New Yorkers who have ever travelled upstate via Route 17, remember the Roscoe Diner? A sticker here? 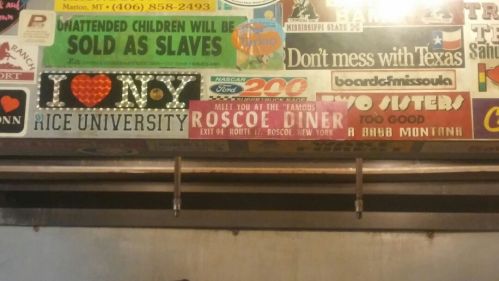 And for you truly adventurous travellers who, like Doc Brown, say, “Where we’re going, we don’t need roads”, they got a sticker for you, too: 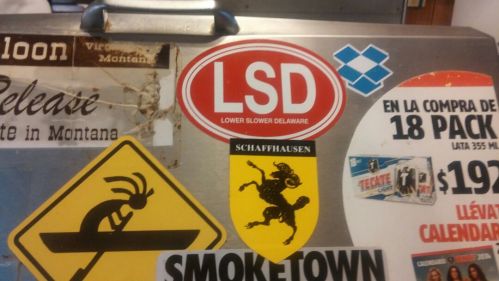 And it has nothing to do with Delaware.

And then I tried to stay up to watch the stars in one of the blackest skies in the country. What we didn’t realize was that as you go north, the sun stays up with you in the summer. It was after 11 before it really got dark. Sucked.

I’ll try to get more out tomorrow. Check Andrea’s Facebook posts if you haven’t already. She’s way more up to date.

But, how about one from tonight’s sunset: 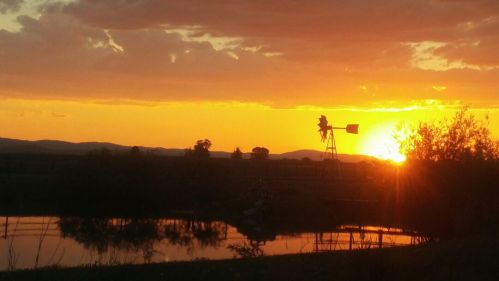 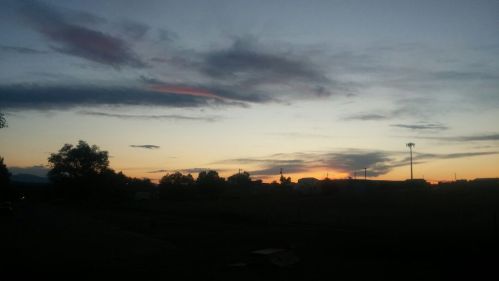 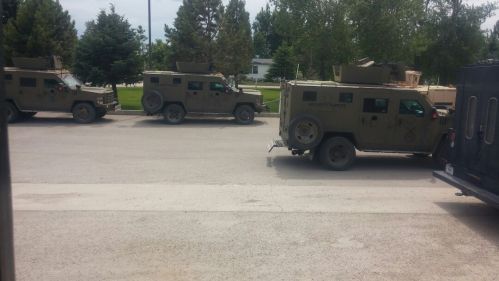 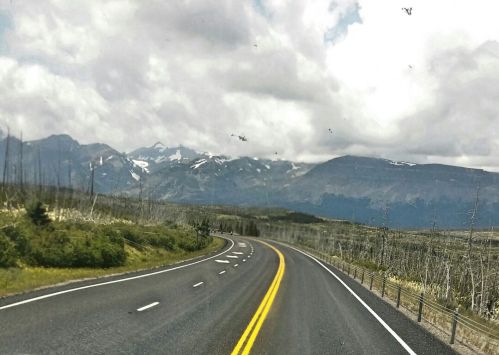 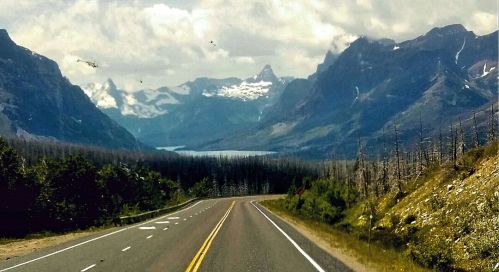 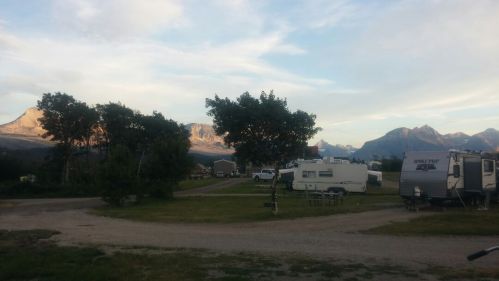