We took another day off from touristing but did not exactly relax. Grey Whale Cove is about three miles south of where we stayed in Pacifica. It is right on Rt 1. The parking lot is across the highway from a cliff looking down on the beach. No traffic lights or stop signs. You’re on your own crossing.

After you’ve won round one of Frogger, you probably want to get to the beach. Whale watching would likely be better from up on the cliff. We’ve been doing that since we got to the Pacifico rv park. It’s the tail end of the grey whale migration north and we have both been lucky enough to see whales spouting and breaching. Still wondering what the big deal is and that people spend money to get a chance to see these big fish jump out of the water. Oh, I know they’re mammals, shut up. I can’t wait for the nightly news to report on the big tragedy when a boat full of tourists out whale watching gets split in two by a leaping, mammoth fishie and then they all get eaten by sharks. Just nuke some popcorn and watch the National Geographic Channel. You don’t have to take a fucking picture up close. We believe you….hold on, no we don’t believe you and furthermore we don’t want to see your goddamn pictures. But, I digress, and where are our whale pics? We were watching, not clicking. Anyway, up on the cliff you could set up a chair, pull out your binocs, and whale-watch away, but, hey, it’s a beach.

To get down the cliff, the state has provided a path that goes down about forty feet and then this:

Maybe that chair up on the cliff wasn’t such a bad idea.

148 steps. Yeah. I counted. Twice. Our relaxing day of non-touristing.

But it was a lovely beach. Beautiful location.

I could watch the surf pound those rocks all day. 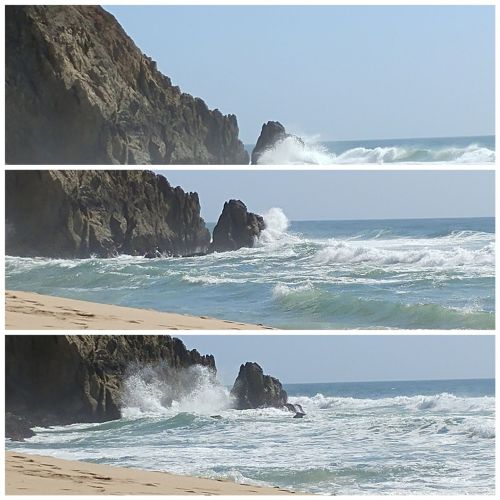 And watch the waves roll in.

And then we had to go back up.

If it weren’t for that drain pipe in the wall I might have been prone to provide an alternate fact for what looks like an ancient culture’s ruins. Right? And no, I have no idea what those stair-like things are.

So we had one more day to finish up touristing. We had a small checklist of places to go. One of them was not really a tourist destination. Andrea paid a visit to a business acquaintance of our brother-in-law. While she was in there, I called the number of a guy who is listed in the “odd things to do in SF” lookup. You could only visit his oddity by appointment. He is the “Institute of Illegal Images”. You know, I think I’ll just leave that subject up to your imagination, and, why would I be interested, anyway? Or, for the curious:
https://www.atlasobscura.com/places/institute-illegal-images
We didn’t go, so nothing to report. Maybe next time. I’m so sorry we missed it.

Our final tourist stop was Balmy Alley (though the camera recorded it as Florida Street). You had to park and walk down this alley. Quite a number of homes and buildings in the neighborhood were adorned with similar artwork. Welcome to Balmy Alley: 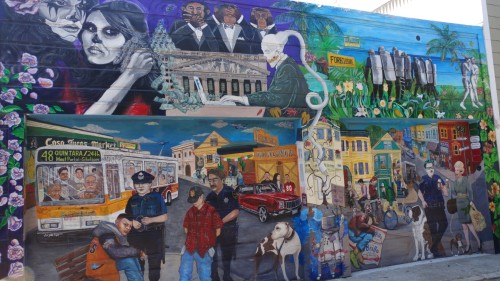 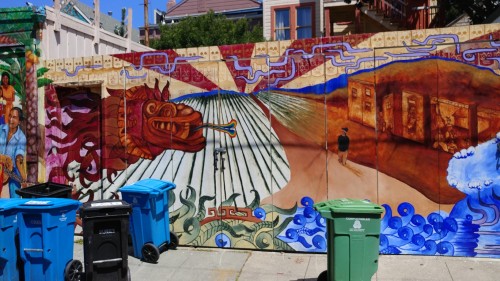 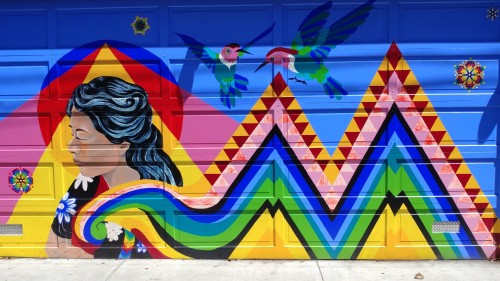 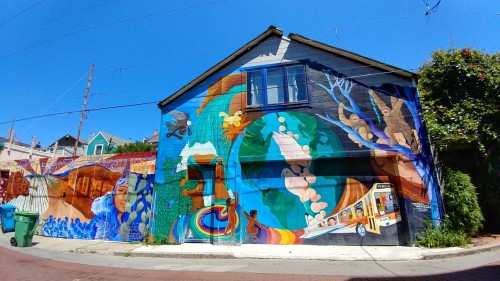 I love all the little things going on in this one: 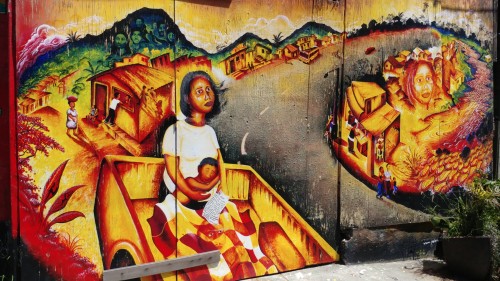 Really – look closely at that rivery kind of thingie to the right – it has jumpers.

This is one of my favs:

Kudos to all the artists.

Most are on garage doors. Pretty damn cool. These are just a few. Go see it. FREE!

The sun did not set over the Pacific that night. The clouds and wind rolled in and it was nasty. As we packed up I noticed the amount of rust and corrosion, mostly on the bikes, that 10 days on the ocean will cause. No wonder so many ocean front houses in Pacifica looked like shit. And they still want almost two million for them. But, we did have one decent sunset a few days ago.

Back to CO for family time until May 14. See you in Bodega Bay then.