The Port Of Garibaldi, Oregon

So you thought Neskowin was nowhere! It is. This place is actually kind of cool. It’s all about crabbing.

And the fucking loud saw mill.

But when you’re sittin’ on the dock of the bay,

We had a hole in our reservations that we couldn’t get resolved with our freebie clubs, mostly because we had little or no connectivity for weeks, so we found Port of Garibaldi RV Park, on the far northern point of the bay. The nice lady making the reservation even warned us about the noise from the saw mill. That’s the main reason I didn’t book at Old Saw Mill RV Park, a block away, though I mistakenly pulled up to their office at first. That one and The Harborview Inn and RV Park, across the street, which was booked, were both further away from the damn saw mill. In truth, you get used to it – and you don’t hang around during working hours. It’s not as loud as our “home” park off I-25 in Monument.

I’d give it a 7.5. Easy, full hookups (back-in only), excellent water, as has been the case in every park in Oregon, no trees to interfere with satellite reception, and walking distance to everything – it is a tiny town. On the negative side, the mill noise, attractiveness (lack of), and no security, though I didn’t see any “characters” anywhere around the marina area. The Harborview park looked nicer but don’t avoid this stop if the “Port of” RV park is your only option.

We started to like the little community. We only tried one offering of clam chowder, and it couldn’t hold a candle to that shack in the Port of Siuslaw (Sy-(emphasis on)yoos-law), in the old towne (why must they add an “e”? – translation:tourist trap) of Florence. Yeah, park in the public parking lot at the northeast corner of the old town and go out on that first dock. The little shack there makes the best clam chowder in Oregon. Can’t say that we tried that many but have tried a few more since.

Anyway, maybe when a restaurant decorates itself like this,

you might reconsider going in. Their chowder was blah. By the way, that award they got was for the best fish and chips in Garibaldi.

Besides the marina, saw mill, three RV parks, and a general store, they have an annoying tourist choo-choo train, replete with an open flatbed car for those with ice in their veins, that runs up the coast for a few towns. I didn’t try to get up close for you train lovers, sorry. 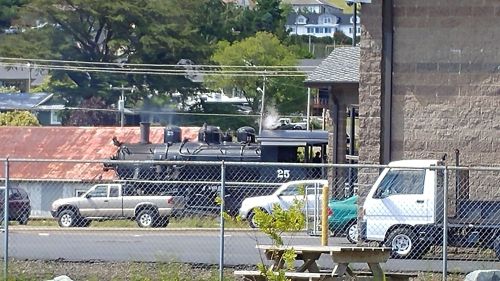 If the noise of the mill doesn’t drive you to drink, the toot-toot of the tourist train will.

As stated previously, we sort of filled in these three days, but it gave us the chance to scour more of the coast for the elusive agate of the year. 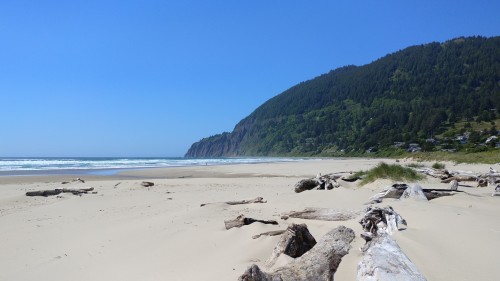 But at Garibaldi Portside Bistro, I discovered this beer:

Three days in a place doesn’t really give you time to get much of a feel for it. And shame on us, we didn’t eat any crabs. So that was Garibaldi.

Here’s our status so far. Including San Diego, all the way at the bottom, 18 stops and over 2,000 miles (no pin in Garibaldi yet). The Washington and Oregon maps are deliberately separated as they are printed in different scales.

Next stop, just up the road in Seaside, OR, for a week.

One thing I haven’t mentioned yet – the signs! Everywhere! You’re either Entering Tsunami Hazard Zone or Leaving Tsunami Hazard Zone! You then might find yourself in a Tsunami Safe Zone or on a Tsunami Evacuation Route. I’ll tell you this, they sell a lot of Xanax on the coast. Those signs get ingrained in your nervous synapses. Bring it on. We all know the big one is coming. So have a big one!

And don’t worry about it. (Damn, I love Imperial Stouts. It’s like having dinner and desert at somewhere between 9 and 11%, you get my drift?)

Editor’s note: Apologies to all of you who are going to die when the big one hits.

One response to “The Port Of Garibaldi, Oregon”