Thousand Trails park, Seaside, OR, is fine. Finally, a Thousand Trails park that I like. This place is big. Some notes for RVers: The southern section, where you register, is, according to the ‘ranger’, less family oriented, mainly because all the activities – indoor pool, courts, games – are in the northern part. The south only provides 30 amp while the north has mostly 50/30. Both sides appear to provide plenty of open sites for dish connection, and plenty of shaded sites as well. Most sewers are to the rear – pull in deep, and some provide the challenge of gravity, uphill. Most sites appear to be fairly level but you will need a little (leveling). Water tested at 23 ppm, the best we’ve ever tested and the softness stick did not change color. With this being our last stop in Oregon, and having tested water in all but a handful of states, and with the caveat that Washingon state could fare better and steal the prize, I award the first annual Best RV Park Water State (©2018) to Oregon. Congratulations.

No Wal-Mart, Walgreens or Home Depot/Lowes, but it has a Safeway and a Rite-aid, an Ace Hardware, and three pot stores for its approximately sixty-five hundred residents. Oddly, it is home to the Seaside Outlet Mall, with all the names you’ve come to hate, or love, depending on your self control with regard to spending at Carter’s and Oshkosk B’Gosh. The mall is less than a mile up the road, at the corner of 101 and 12th Ave, where you turn for the park. I think that we’ve picked up every agate on the northern Oregon coast, so Andrea went up there today, a gloomy one, and our last here.

Something we’ve noticed in Oregon – seems like an anti-Starbucks thing. Every town appears to have at least one, independent, drive-up coffee booth in the mode of Dutch Bros. Starbucks are not everywhere. They also have taco stands like that and last night Andrea picked up made-as-you-wait fish and chips in such a drive-up called The Grizzly Tuna. The menu is Small or Large. That’s it. Best tuna fish and chips she ever had. I had a bite and concur. I had this for dinner: 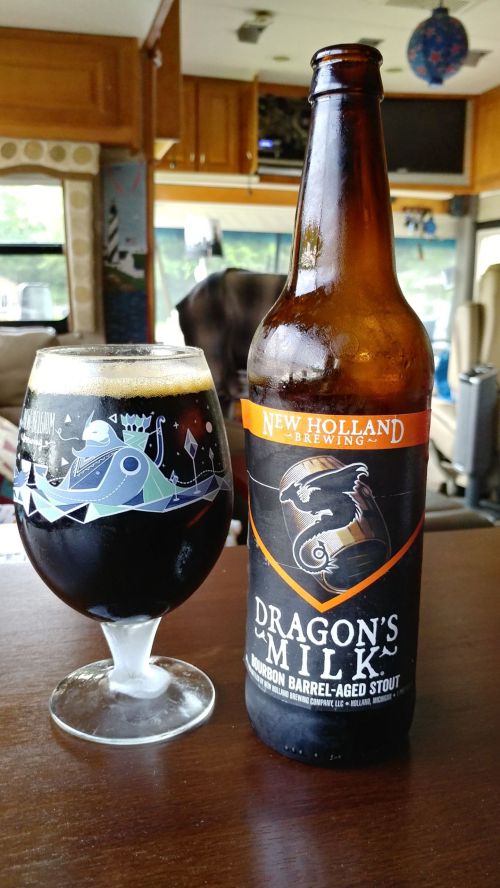 A product of Michigan, one that the craftsman of the state should be proud of. I believe this one enters the ring at 11%! Top that! By the way, after breaking my last Chimay beer goblet in Bodega Bay, I started a new collection of glasses. The first is a black mug with, no, not the Dark Side of The Moon cover, Crater Lake stuff on it. I prefer not to advertise company logos, other than Pink Floyd, and that’s more touting an artist, but sports teams and National Parks are ok also. I have one remaining white NY Mets tee and the back of it lists over a dozen sponsors of Mets Tee Shirt Day, 1999, or whenever I got it. When they are free, exceptions can be made about the advertising. Anyway, the next two were purchased in Florence, the olde town section. I picked up a sturdy, clear glass mug with an eagle etched into both sides, for $6 at a vendor booth by the bay. Then we went into a bar that advertised the biggest selection of beer on the coast. Ok, they have 15 tap selections, clearly described on two giant TV’s on either side of the bar, and a bunch more in bottles. However, out of 15, they only had one Stout, no porter either. The rest were either IPAs, or some variation of, Pale Ales, similarly bitter panther piss, or lager. What’s with this infatuation with hoppy beer? Anyway, I told Andrea I liked the glass I was using, same as in the picture, above, and she immediately tried to slip one into her bag. She probably could have, but those days are past. I had about a half dozen Tabard Ale House mugs in the day. I bought the one above for $4. The glass is a bit thin so I don’t have great hope for a long life with it but I like the feel in my hand. It does advertise New Belgian brewing, but it is subtle. I will fill that glass with the darkest, maltiest, most potent beverages I can in its lifetime. Maybe I’ll name it Tiny Tim. But, I digress.

Now, Seaside is officially just north of the range in which agates are generally found. But, we went back to Short Sand Beach which, I believe, is in Oswald West State Park. And no, I don’t know if Ozzie had the last name of the guy playing the original Batman or there’s an East Park. This beach has a couple of stream runoff points, locations that seem to have a higher concentration of agates among the stones. You know, like 1 in 100,000, rather than 1 in 500,000 on the beachfront.

The hike from the upper parking lot on the west side of the road is about a half mile but it may be the most beautiful hike we’ve been on this entire trip, albeit, most have been short and steep to beaches.

This stream was one that widened when it reached the beach.

My favorite part, as usual, 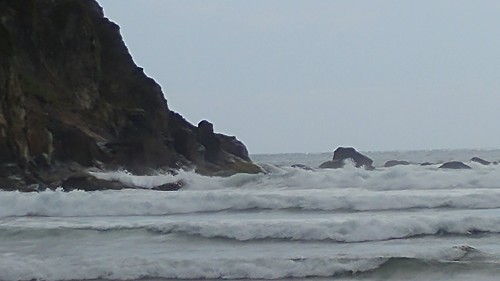 Is watching the surf crash against rocks

And just watching them roll in with the occasional rays of sunshine turning them green as they rise.

Surfers were working the waves: 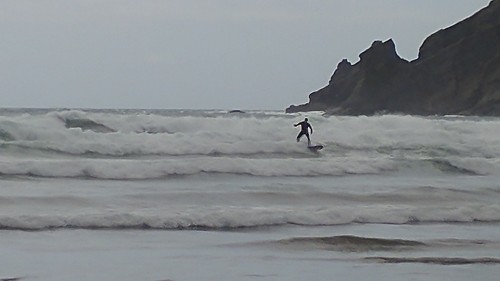 Surfer dude rode that wave from the point it broke, way out there.

The agate haul
was so small
it left a pall
over all.
© The Pulitzer In Poetry 2018
Two days later we went to another beach on another gloomy day.

The beach was nice enough. 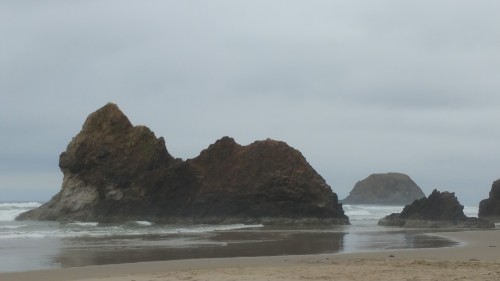 But it was cold.

I couldn’t just sit on a log so I put my eyes to the ground and started looking. Our family was trained by the Exhaulted Master of Beachcombing, our father, so looking for tiny things in the sand is like riding a bike. Truth is, my eyes seem to be on full scan anytime they are not on this damn phone. As in the words of Diane Warren, one of the most influential songwriters of the day, and Stephen Tyler, “I Don’t Want To Miss A Thing”. Within a few minutes, this thing appeared in front of me:

It’s just a piece of quartz but that purple section on top is most likely amethyst. At least, that’s what we’re going with no matter what you say. Andrea celebrated our most prized rock.

On Friday, we went up to the tip of Oregon on the coast, to Fort Stevens State Park. Google maps indicated a Wildlife Viewing Area. I read somewhere that Bald Eagles are known to hang out on the wood pilings alongside the jetty nearby. Once in parking lot D (enD of the road), we walked straight out to the beach, intending to walk around the cape to the wildlife viewing “stand”. Oh, boy, some like minded people.

The tide was almost all the way low so it was a long walk out to the water. Having forgotten my cane – I do that when I first get up, feel good, start walking and two minutes later, uh-oh, where’s my cane? – Andrea found a nice piece of driftwood that was strong and worked perfectly. We had the beach almost to ourselves.

The land across the way is Washington.

We strolled around to the right as the mouth of the Columbia River turns inland. I split my eye scans between the ground, which had no rocks of interest, and the skies. I had brought the good, Nikon binoculars and stopped occasionally to look over at the jetty. 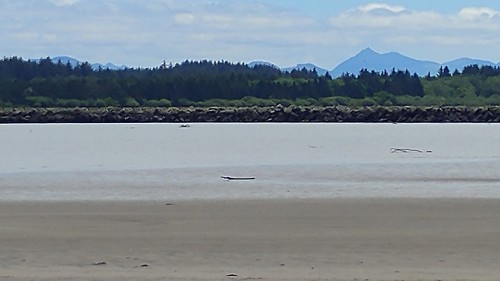 There he was. Right in the middle of the jetty, the unmistakable white head moving! I saw my first Bald Eagle. He was still there for Andrea to see but by the time I took that picture, he was either gone or the camera just can’t pick up that detail.

We finally got to the impressive concrete bunker they call a Wildlife Viewing Stand. I suppose ammophila fans favor the view but the rest of us don’t have a prayer of seeing anything but beachgrass. 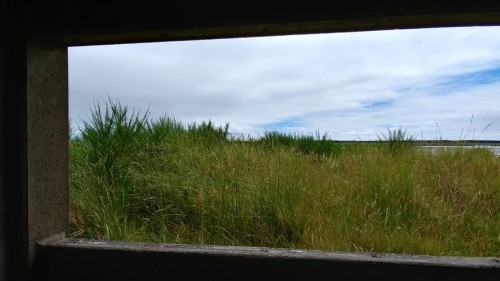 Having now seen a Bald Eagle, we drove a couple of miles down the road to the beach where you can see the remains of an old shipwreck at low tide.

Captain H. Lawrence of the four masted steel ship, the Peter Iredale, ran into a strong squall as he attempted to turn into the Columbia River in October, 1906. The winds ran the ship aground and recovery efforts were not successful. So they left it.

The beach looked like nice enough to the left. And then we noticed the cars:

We found the little road that gets you beach access and then stopped just as the pavement runs into sand. Wish I had a picture of that – tire tracks a couple of feet deep. Oh well. Put it in super low four wheel drive and go, don’t stop.

That was fun, swerving back and forth. The low tide provided plenty of hard sand to drive on. Here’s my artsy picture of the shipwreck through the window, and a stout on the console.

There were more shells on the beach than rocks. 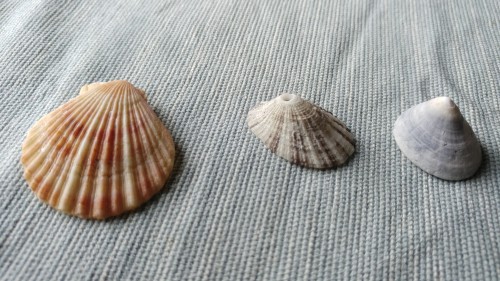 Here we have examples of shells: 1-colored fan; 2-volcano; and 3-mountain. I’m told those are not technical terms but perhaps they should be. ©©© Ok, now they are.

Luna loves the beach and went nuts running around – so much so that she slept until 11:30 today, went out for her morning walk and has slept since (now 3:15pm).

And that’s it for Oregon. One of these years we’ll have to go inland a bit more. I think we’ll be driving along the Columbia River east on the Oregon side when we start heading back to Colorado in late July. The blue and purple pinheads in that middle, brown section (where I purposefully kept the OR and WA maps separated because the scale on the Washington map is larger), is where I intend us to stay on the Columbia River, at Cascade Locks and The Dalles. The other pinheads are booked stopping points, in no particular order. 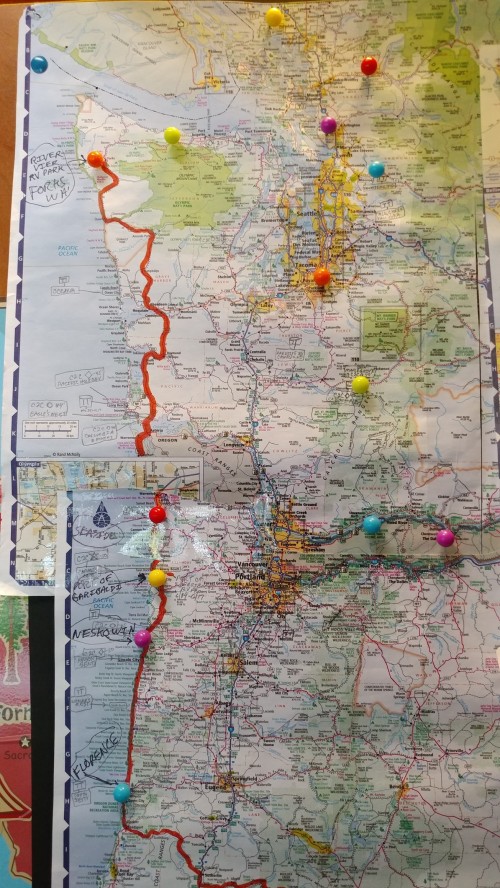 Tomorrow’s ride, to Forks, WA, is going to be a long one for us, 218 miles. Hope we don’t miss any Bald Eagles.

Andrea came back from the outlet mall with the obligatory grandchildren clothing, and gifts for me! Happy Birthday to me, a month early:

A new Chimay glass! Is that not a work of art? The Founders Brewing Porter is another Michigan product. Kudos to the state that brought you Flint water. Now, Young’s Double Chocolate is from Bedford, England, the city that gave us the name of the principal of Winthrop Avenue Grammar School, when we were all there, as well as the main street in Bellmore. Is my memory of this shit not world class? And why the fuck does my error correction keep changing ‘of’ to ‘if’? It just did it again! Maybe they should spread the keyboard apart between the I and O.

Finally, Andrea got Wrennie a present, but she thinks it’s so cool she’s going to wear it until we get back to Colorado. Oh fuck! 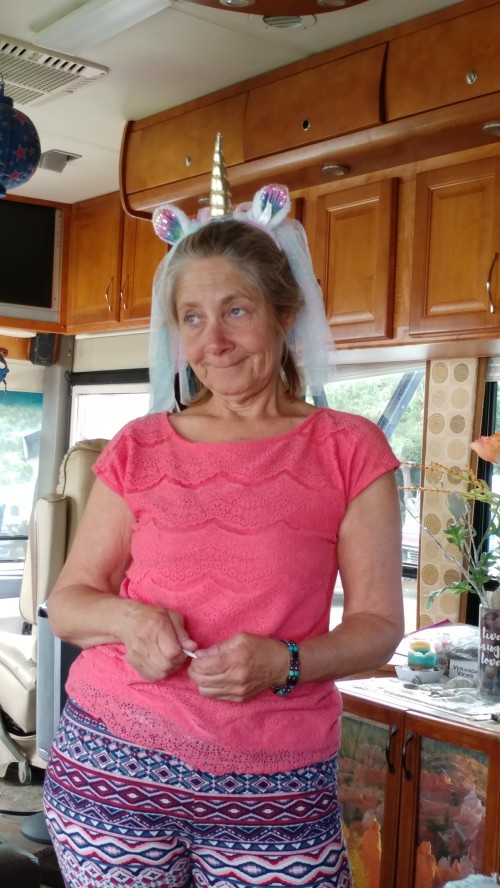