We saw plenty of the coast in California and Oregon. How different can it be in Washington? So we skipped the lower part with all the Coast to Coast and Thousand Trails parks with no sewers and their bad reviews – I trust RVParkreviews.com because I post reviews there. Like every other review site, you have to take what some say with a grain of salt – please tell me what that expression means! A grain of salt? Salt is great! Never doubt it. Especially on french fries, onion rings, chicken soup, eggs, and on my tongue after burning it on a potent jalapeno. That works, you know – treating fire-mouth with salt. No joke. If you overdose on jalapenos or habeneros or any other stupid pepper that causes pain rather than joy – why do we eat these things to begin with? – just cover those taste buds in your mouth with salt. They will close up and you can now enjoy that Modello. Hmm. That was a tangent with tentacles. But I’m too pissed off about Washington to lose the point. It’s friggin pouring!

And it appears we have a forking problem with our levelers. We arrived in River View RV Park in Mora, WA (at a crossroads, Mora Rd and 110 with a gas station/restaurant, and that’s about it), but with a postal address in Forks, eight miles up the road (on US 101), at about 5pm and pulled into our unlevel site a few minutes later. The RV engine needs to run to operate the electric levelers so we have to leave the engine on to do so, annoying neighbors (though we full timers understand). Once leveled, I can turn the engine off and then we connect electric, water and sewer. Then, we let the slides out. The driver’s side slide is huge – it starts behind the driver’s seat and goes back through the bedroom, just short of the rear bathroom.

And that’s when the shit hit the fan – if driving five stressful hours on twisting, winding roads, with an extraordinary amount of inciteful commentary from the peanut gallery isn’t enough, now the forking levelers are not keeping us level with the slide out. We’re sitting pretty at first and then we start sinking to the left and rear. The goddamn rear left leveler isn’t holding. The front left one might be f’ing up too. Do I sound mad? As we’re leveling, the rain started. At one point, some intense thunder rumbled, and the rain intensified. After several attempts, I was hoping the levelers were just sinking into the gravel and mud. I decided the prudent thing to do was to put out our heavy duty rubber plates and some two by four wood pieces.

Not happening. The left side levelers are not holding us up. I got soaked in a raincoat and gave up. Tomorrow, if the rain ever stops I’m going to disconnect our utilities and move the RV in the site until it is nearly level on its tires. It’s Washington’s fault. I hate this forking state! Now we need to get the levelers fixed. Ca-ching! I hate this state. It’s the rain’s fault. They can take their mother-forking rain forests and shove them up Seattle’s place where the sun don’t shine. Oh, that is Seattle. Who needs this shit? Check back with me when the f’ing rain stops.

No, I’m still pissed off, Monday, the 25th. We disconnected all the utilities, pulled in the slides and maneuvered around to get the left side up a little on tires. The site still slopes left. After several attempts, the last couple in rain again – I hate Washington – we’re somewhat level but the left rear still sinks a few inches. Andrea put a piece of a two by four under the frame near the lift and the RV sunk into it. It’s helping. We’re stuck with a little tilt and a broken leveler. Unless it becomes a bigger problem, we’ll fix it back in COS. We will be taking careful approaches to campsites in the future, sizing them up for flatness before we pull in. With all the old, woodsy Thousand Trails parks on the itineray, I don’t see a lot of level concrete slabs along the way.

In the meantime, if Washington can keep producing rainbows like that sucker, we’ll forgive some of the rain.

We left for Ruby Beach, within the sprawling Olympic National Park. I’m not sure we’ll ever surpass that rainbow shot, but perhaps someday we’ll be able to capture snapshots that our brains experienced at any split second in our lives and then I’ll include those audial-visual mixtures from yesteryear and even those “I Know!” moments, the ones over the rainbow, but we’ll just trudge on now with stuff like this. As we approached the coast, the sky cleared. Ruby Beach from the parking area:

Why do they all have to be so far below?

Pretty steep path for this one. Going up will be fun.

You don’t see this on many east coast beaches.

All right. Washington state got some points. 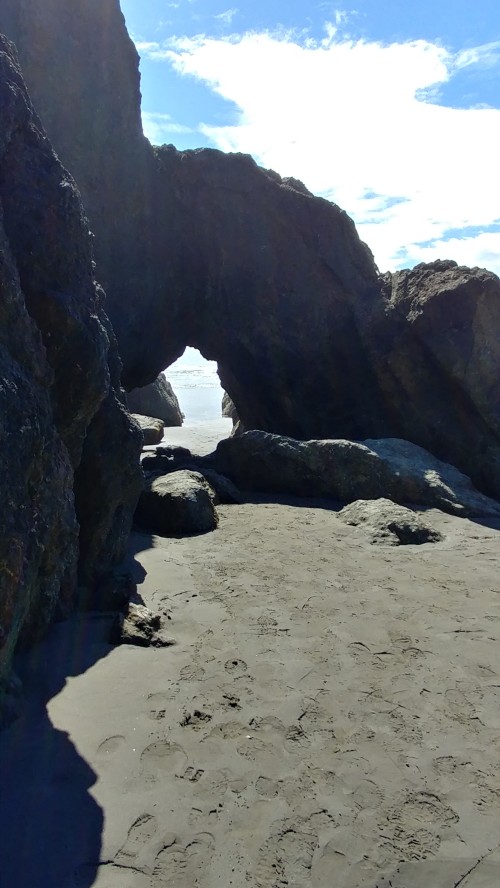 Of course, the waves are always coming in.

I don’t know what that lighthouse looking thing is out there on the Rock – looks a little like Alcatraz. 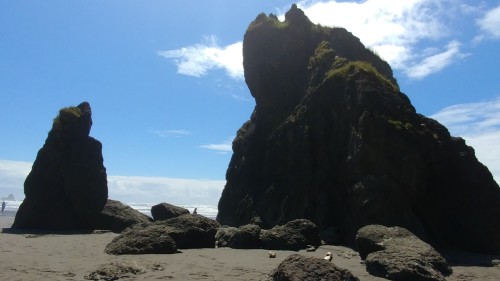 The odd thing was that there were no birds of any kind on the beach. 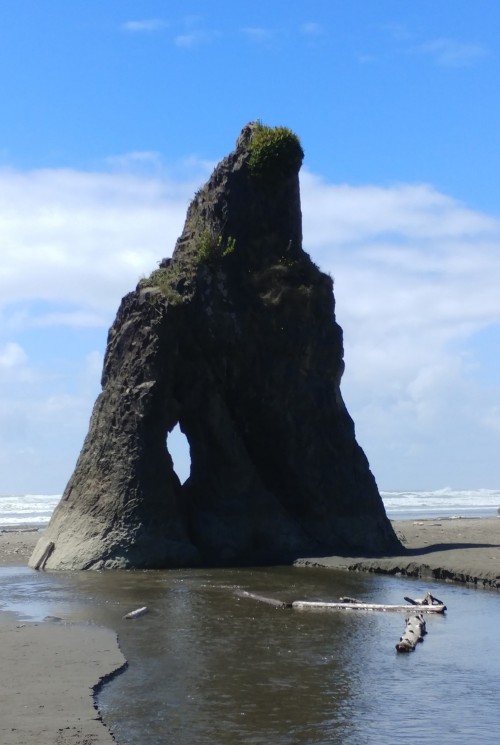 Andrea walked about a mile down the beach to find a bathroom, successfully, though the police report says she was behind some driftwood, and was worn out from her ordeal (she’s sprawled out in the center on a rock that she says conformed to her back perfectly, with Luna at her side keeping guard):

All in all, Washington redeemed itself. Nice beach.

The sun was dropping

And we still had a rain forest to visit. One last look:

The Hoh Rainforest, within the major chunk of contiguous land comprising Olympic National Park, was on the way back. The twelve mile detour (for our drive back to camp) to the closed Visitor Center was worth it.

It was pretty green.

Lots of ferns and moss and big spruce trees.

We’ve been in a lot of forest land but nothing this wet. In Colorado, you worry about all the dried up underbrush. Here, where rainfall is about an inch, every third day, the underbrush is very green. Fire danger low. The trees are draped in moss. The trees might be different but it kind of reminds me of Louisiana. Just a little.

Though the National Park brochure is full of pictures of wildlife, we saw just one duck. It’s kind of a long drive for a bunch of trees. But, it was a pretty drive. And, Lester Holt just did a piece on the quietest place on Earth – this is it! No wonder. You can’t even hug the trees here. They’re covered in moss. Let’s get out of here. It’s creepy.

Speaking of creepy. This area’s got a thing about ‘Twilight’, the vampire show. I have no idea what it’s all about. They also love Big Foot. I’ve never seen so many wooden sculptures, some 10′ high, of a big, hairy, ugly dude.

Tuesday, off to Second Beach. This is also within the careening national park boundaries. When you mix in a couple of Indian (must I say native American?) reservations there ain’t a whole lot left for living. It’s one giant forest – the northwest part of the Olympic Peninsula. Quietest place on the planet. Boy, we’ve been in some isolated places but this has got to get the Olympic gold ring for witness protection hideaways. Maybe not. Sammy The Bull might not blend in here.

Anyway, yet another fantastically beautiful beach. And another bitch to descend to. It put the replacement hip and all accompanying living material attached to it to the test. What test? Ten years ago this would have been nothing.

But we do have to pause to appreciate it.

Check out that glowing fern, growing way up, with part of a leaf lit up by the sun. A big fern plant thirty feet up growing out of a tree! Weird tree, too.

The flat part of the hike is beautiful.

The ancient, weird trees are quite spectacular.

According to the National Park literature, the hike to the beach is mostly flat. Whoever wrote that must be Trump’s speechwriter. Totally full of shit! The trek through the forest is beautiful and after a bit of a climb, you descend to the beach – steeply. And it kept going down. Damn, this is going to really suck going up. And, here we are. 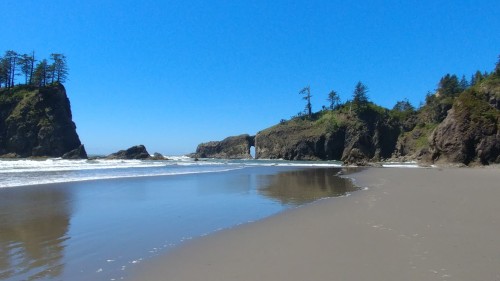 I didn’t mention the mass of driftwood – not just a few pieces of walking sticks, but logs, big fucking logs that seem thrown together, as you walk out of the forest, to thwart your attempt to reach the beach. There’s no easy way around them. I didn’t take a picture of them but for short people, they were kind of dangerous. At least for us with compromised undercarriages. Maybe that was why a rescue helicopter passed by a couple of times. But it was very cool.

Very cool, strong breeze off the water. Those giant logs provided shelter when we needed to warm up. As usual, I get mesmerized by the action of the waves against the rocks. 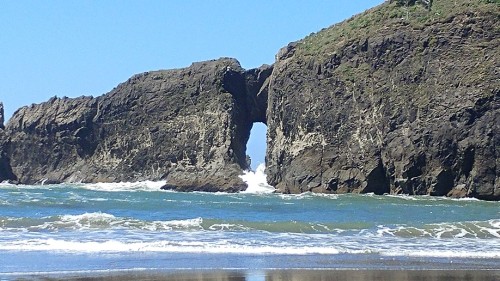 And you gotta have one of these sequence collages:

We walked about a half mile to the left to see if we could find the entrance to the path for Third Beach parking – yeah, whoever made up the names of these beaches must have been some kind of math genius, I guess. Got a little different perspective.

I screwed up the planning for this part of the trip. We could have used a week here, and skipped Seaview. I’d have liked to go up to Neah Bay but everything is very far apart and I didn’t give us enough time for everything.

Tomorrow, on to Shadow Mountain RV Park, to the west of Port Angeles. The eastern, mountainous part of the park is over there.

From the quietest place on the planet, later.