North Cascades National Park has been high on my bucket list since well before the Morgan and Jack road show. Prior to 1997 though, I don’t believe I’d even known the park existed. Do they teach kids today the whereabouts of our National Parks and Monuments other than the Grand Canyon or that tricky one, Yellowstone? I didn’t know much about them until I was 47, so either they didn’t teach that piece of geography in the sixties or those memory cells were deemed to be re-usable along the way. Our Social Studies class, or was it Geography?, in NY, must have offered more than General Grant’s Tomb, a national something (Historical Site), and the Statue of Liberty, a National Monument. For a long time I wondered how any other national monuments, other than the Washington Monument, which I learned later was actually a National Memorial Park, and the Statue of Liberty, could be called a National Monument when they didn’t have a standing, man-made structure, you know, like a big gravestone or or a giant green statue holding a torch. Such was the interest of a kid from Brooklyn.

So what makes Yellowstone tricky, geographically speaking? You know, like where is it? OK, here’s a clue in a question. What do Yellowstone National Park, the Glen Canyon National Recreation Area, Dinosaur Natonal Monument, and Smoky Mountain National Park have in common? (Other than that they are administered by the National Park Service.) Mull on that, or cheat and Google them. I’ll bet most of you east coast folks didn’t even know there was a Dinosaur National Anything.

In 1997, specifically Labor Day weekend in Albany, NY, a switched turned on in my head and I began research into and planning of The Big Trip. The following June we flew out to Las Vegas and embarked on a 2,200 mile trek, a circular route from the Hoover Dam and the Grand Canyon through southern Utah, western Colorado, and back through all five national parks in Utah, over sixteen days. As part of the preparation, I bought one of those National Parks books. I was rather awestruck at the photos of North Cascades National Park, one I had never heard of. I put a bold checkmark on those memory cells.

When we started talking about this west coast adventure, North Cascades had to be in the conversation. Rarely does the anticipation match up with the reality, and I had been hyping this place for twenty years, but, it is as advertised, stunning. It is the least visited of all our National Parks, mainly for logistical reasons. One road, US 20, runs through the park. It is 133 miles from the Seattle-Tacoma airport to the visitor center in Marblemount. It’s another 43, jaw dropping miles with a few spectacular overlooks, to the Washington Pass Overlook, and another 32 miles to civilization, the small town of Winthrop where you can stay. You could drive another 180 miles east to Spokane, or drive back to Seattle and see the park going west. It’s kind of big for a one day trip. So people skip it. Don’t, if you come to Seattle.

We stayed in Grandy Creek RV Park, a weird kind of place – half Thousand Trails and half KOA, in Concrete, WA. Actually, it was about eight miles west of the actual town, and its 2,500′ airstrip. More on that later. Nice park, most sites are treed so satellite dishes only work in a few. We had a spacious back-in with full hookups, but just 30 amp electric, which limits your electrical usage at times and, we’ve found, doesn’t provide enough oomph to our clothes dryer. Other than the choose-your-own-site policy, which I detest, no complaints about the park. Well, the KOA side had some function extend beyond the quiet hour on Saturday night, and they were loud, but I’m ok with people having fun.

By the way fuck Trump and …..(editor’s redaction).

Onto the National Park. Before we even entered the park, we stopped at a roadside park in Rockport alongside the Skagit River. An interpretative board included information on Bald Eagles in the area. Sorry, they only come around in the winter, but when they do, it’s by the hundreds. In fact, Concrete celebrates their return every weekend in January providing volunteers at multiple sites along the river who help with spotting and enjoying the spectacle. The eagles come for the adult salmon population that runs upstream in the fall, actually, their carcasses, when they run out of gas. I would love to come back some January. Anyway, the surprise for us was the view to the east, into the park:

After stopping at the visitor center in Marblemount, where – can I say this without the PC bullshit? – a cute Park Ranger pointed out the most scenic points on the drive and when I asked if it was worth driving to the Washington Pass, she asked if I was asking to be convinced and that was an easy yes. She asked if I liked looking at jagged mountain peaks and I said, sign me up. But first, the waterfall at the power plant at Marblemount:

Not bad for a trail carved out by the power plant.

With the right angle of the sun, its own rainbow: 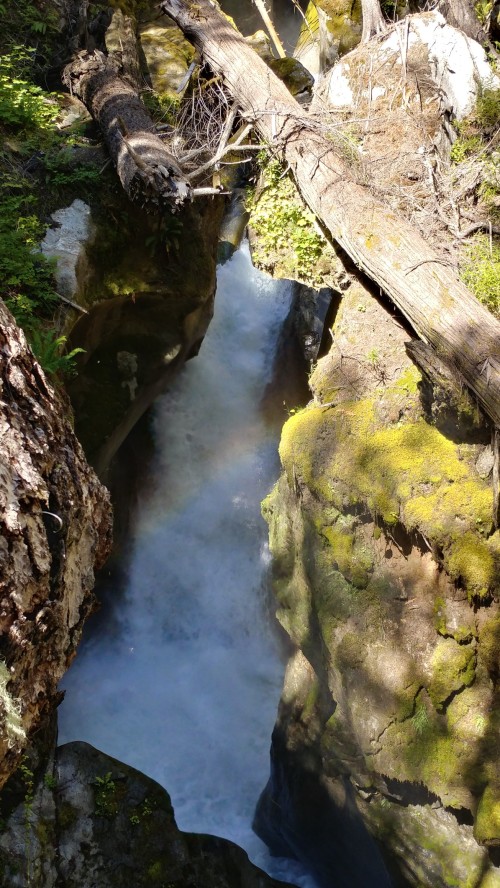 Give them some credit. They even installed colored lighting on the trail and the waterfall along with music for the night time visitors.

And then off to the mountains, and through them.

Ok, let’s just bag the commentary (other than any keyboard entry to put the photos in sequence – otherwise, WordPress randomly fucks with them. 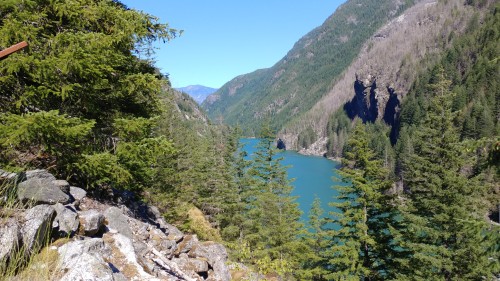 A few dams along the way created lakes.

It just kept getting prettier. 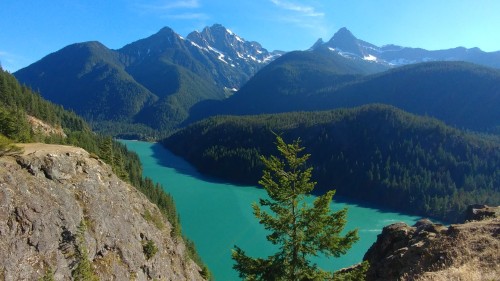 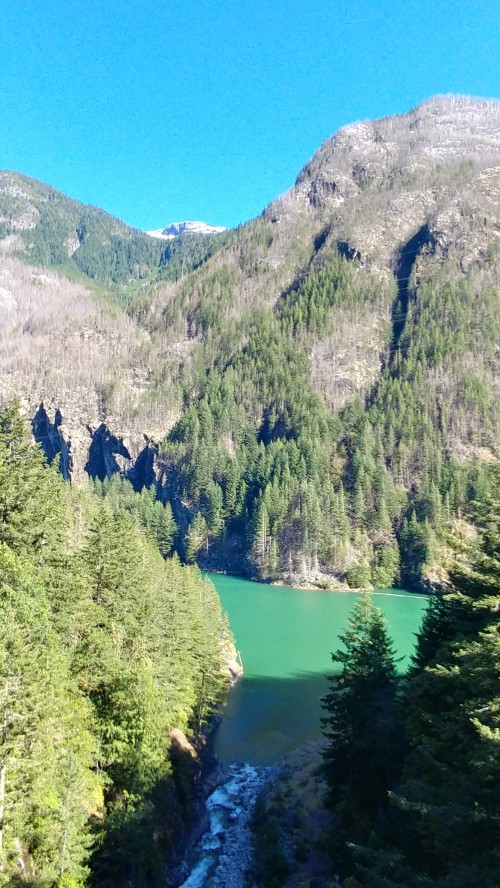 Actually, that’s underneath a bridge, the remains of a skinny waterfall, leading to the Skagit River.

Now to the north:

And now deeper into the park: 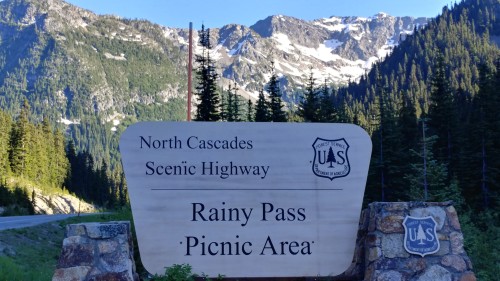 Walking out to the middle of that road to the left:

It was like that for miles. “Look at that!”, every minute or so,

as the road turned.

At this stop we neared the Pacific Crest Trail. 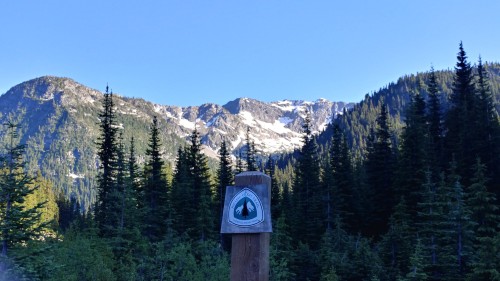 Finally, we made it to the Washington Pass Overlook.
Ready? 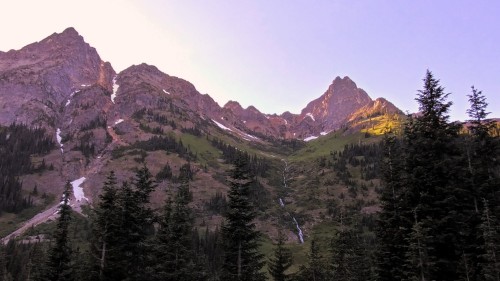 No photoshopping. The low sun in the sky created those colors.

Some big views, depending on what part of the mostly railed trail of the overlook path you were on.

Here’s one I touched up a little, showing the railing.

It was a place you could hang out and marvel at this stuff for hours.

I would love to take that drive again in, perhaps, May, or the earliest US 20 opens – it closes for the winter, to see more snow capped peaks. As it was, we had perfect weather, a rarity in this part of the country. It has been like this, if not a bit hot, for weeks. Karma, baby.

I can’t add any more photos to this email to Carlinrv.com because of size issues, even after using a size-reducing app to cut them down over 50%. So, day two of our stay in Concrete provided a nice surprise. More good Karma.

Oh, back to the question, what do Yellowstone National Park, the Glen Canyon National Recreation Area, Dinosaur Natonal Monument, and Smoky Mountain National Park have in common? They each have borders over multiple states. Yellowstone, most of which is in Wyoming but also overlaps Idaho and Montana. Glen Canyon, which includes Lake Powell, spreads over Utah and Arizona. By the way, if you ever go there, do not miss, and I cannot stress this in the highest of bucket list terms, the short hike to Antelope Canyon near Page, AZ. Dinosaur National Monument is mostly in Colorado but the big quarry is in Utah. Lastly, Smoky Mountain National Park is in North Carolina and Tennessee.