Ouray RV Park and Cabins isn’t exactly open for the season but they took our money and put us among three or four other campers. This is our view south over the nearly empty park, 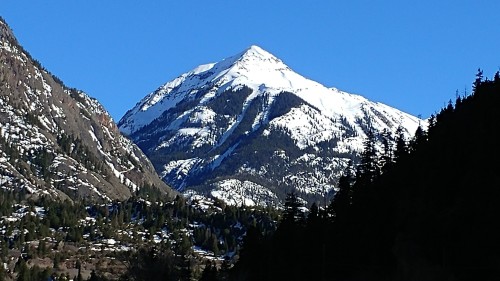 from Site 71! 71 yet again! What does that mean? It is my double rainbow. It is explained in detail in the book.

There’s a stream that runs to our right and from the mountain on the left I noticed a waterfall later in the evening: 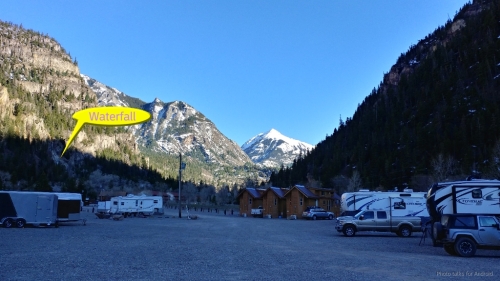 We are surrounded by mountains. Quite the change from the desert southwest. The elevation is 7,792′. This will get us ready for Monument Hill’s 7,300′.

Saturday, 4-20. It’s the only day of the year that Andrea lets me wear this shirt:

We went to town and spent money as good tourists do. Lots of opportunities to empty your wallet. 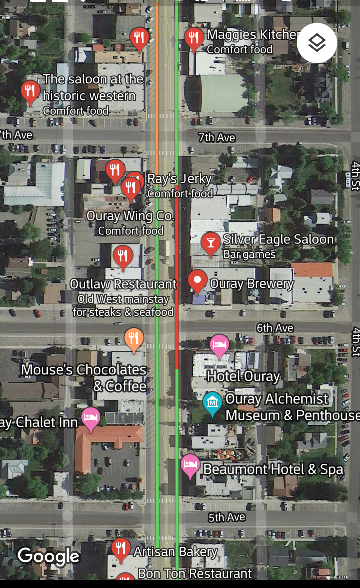 Ouray is known as Switzerland, USA. The climate and scenery are similar. Cute little town.

Here’s a shot from just above as 550 twists out of town to the south:

With some time on our hands, we decided to take a drive on The Million Dollar Highway, aka, US-550 between Ouray and Silverton. The best part of that drive is the half near Ouray, so we only went to the summit of Red Mountain Pass. It’s a great drive:

Quite a few sheer drops and hairpin turns. Not for everyone.

The day turned a bit bleak. We escaped with just a sprinkle.

April 21st, Easter Sunday. Well, you can go with that rolling a rock story but we met the living and breathing Jesus in Apache Junction and he saved us. The bunny is more believable to me. Speaking of, one of the stores we visited in Ouray was called Mouse’s Chocolates and Coffee. Seems like everybody’s got their fingers in that cookie jar, the one that bubbles over with money if you add coffee to your name. Anyway, they had some Easter Bunny related goodies, among others, that we couldn’t resist. Thank you, Rick, Security at Canyon Vistas, for directing us to Mouse’s.

On to Nathrop, Colorado. From Ouray it was up US-550 to Montrose and then east on US-50 with not one, not two, but three mountain passes. The first, Cero Summit, sneaks up on you, a relentless in and out climb. No big switchbacks but it seems to never end. The next, Blue Mesa Summit, pisses you off because you think the only one left is the big one. Before we got to the big one, we had lunch.

For one of the only times in five years of fulltiming, I planned a decent location for a lunch stop. Usually, your halfway point on a drive, or where ever you anticipate a stopping point to eat or rest, does not coincide with a pleasant location. Out in the desert you just look for a large dirt patch on Google Maps. In towns you find a park or, sadly, a Wal-Mart. We usually don’t plan for a scenic location for lunch and thus end up in a dusty parking lot, the dreaded Wal-Mart lot, or pulled over on a truck route with huge semi’s shaking us up on a tilted patch next to the road.

US-50 goes through the Curecante National Recreation Area which includes Blue Mesa Reservoir. At exactly the halfway point, by driving time from Ouray to our campground in Nathrop, I found a small paved road to a parking area, quite visible on Google Maps, with about a dozen marked parking spaces (telling me it was paved), and other space that could fit at least a couple of large RV’s, and a turnaround.

I used the Gunnison Lakeside RV Park as a stopping point in my GPS to warn me that our turn was coming up.

We had a pleasant lunch, with another couple who had the same idea, overlooking the frozen Blue Mesa Reservoir. One of the more pleasant stops in Odyssey history. Sorry, no pictures of the frozen lake. What was I thinking?

Then it was on to the big one, Monarch Pass and the Continental Divide. Sounds impressive. 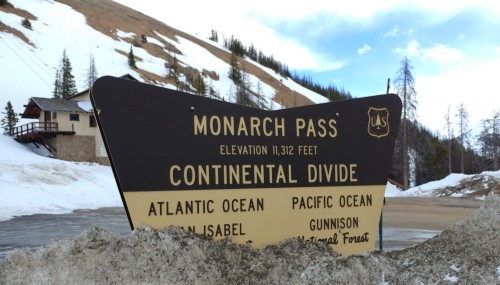 There’s an exit on I-40 in New Mexico by that name – Continental Divide, but I’m not sure if it’s a town. Anyway, as we crept forward out of the parking lot, the view east was pretty nice, but I wasn’t getting out of the RV again in those near-freezing temperatures up there. This is through the bug-spattered windshield looking east over mounds of plowed snow: 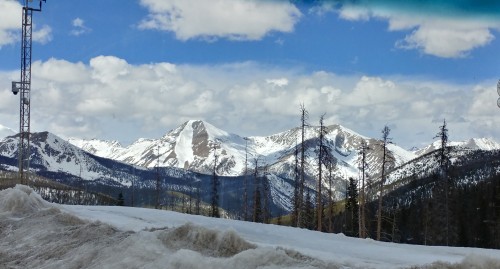 As we approached our destination, we both spotted a brown, swirling cloud directly ahead. As we got closer we could see it clearly as a massive dust devil, a mini tornado whipping around just across the road from the Chalk Creek Campground in Nathrop, our home for the night. Andrea took a picture that she will post on Facebook. It might have been a hundred feet in the air.

This is it. Last night on the road. Sitting down for dinner, the sun is lighting up the tops of some unidentified, snow covered mountains to the east,

and the Collegiate Peaks to the west. Beautiful! Nice, updated campground. Good for a one-nighter with easy pull-thru’s or as a home base for exploring the area which is worth doing. You won’t find many more mountain-scenic locations in the country. One more climb to go, Wilkerson Pass.

Monday, April 22, 7:30AM:
Fuck! It’s 33° out there, 56 in the coach. That solo space heater wasn’t up for the task. I hate those noisy overhead heaters but here goes. All that beauty outside is covered in clouds. And now Andrea has my cold.

Time to get going, “home”. We get on US-285 north for a few miles where US-24 t-bones US-285 from the east. It’s a bit confusing there because 285 becomes 24 north of the intersection and the east/west road is actually 285/24 until they split apart at Antero Junction. Got that? 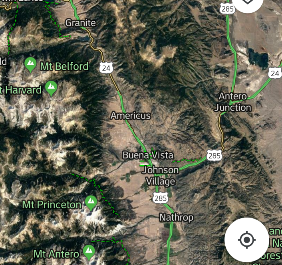 As you start climbing out of the Nathrop/Buena Vista area, the Collegiate Peaks (do you see Mt. Princeton & Harvard?) scream at you in the side view mirrors to stop and take their picture. Having stopped many times before, I resisted. In a car I would have but there are few spots to pull over a huge RV. Onward.

Once beyond the view of the Collegiates and out of a pretty canyon, you’re on a somewhat flat stretch toward Antero Junction where more mountains cover the horizon to your left. I asked Andrea to take this picture:

I snuck one in also: 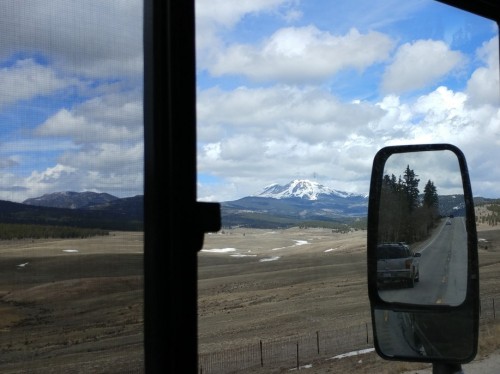 Once past Antero Junction, you’re in a flat valley and except for slowing down to 45 in the town of Hartsel, you can crank. Just before the summit at Wilkerson Pass on the west side is a large, unmarked pullout big enough for a few RV’s. You have to know where it is. 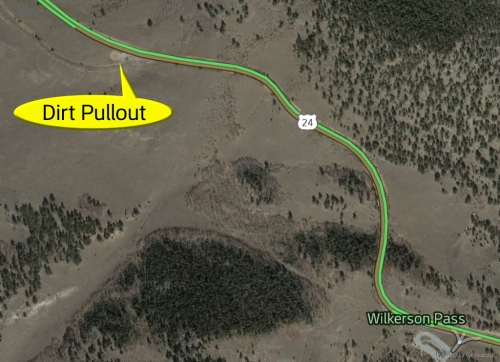 Now you know. The view across the valley to the distant mountains is better than this wide-angle:

One last travel photo from that pullout:

Once you peak at the pass, it’s all downhill but if you are going to take this route into Colorado Springs and I-25, be warned. Just after you pass the traffic light for Pike’s Peak, you go down 4-7% grades on a twisty-turny wild ride through the gorgeous Ute Pass, one of the better and tightest canyon drives in the country. For you newcomers, if you haven’t stopped in Colorado Springs before, put it on your list of places to visit before you die. Lots to see and do here.

And we’re back. The schmuck that owns our “home” RV park, Colorado Heights in Monument, now charges $8/day for 50 amp service. What a prick! As usual, the two nice sites are taken so we’re up on the hill.

I think that does it but only for a couple of weeks. Though the RV will be in storage, I’m going to have to post an entry or two from Greece! It should be interesting.