We spent five days in Colorado Springs last week. The prime reason for going back was, of course, a grandkids fix, more specifically, Wren’s first birthday. Turns out that she and Leo are still the cutest kids in the world. No shit! Well, maybe a little on my arm one day but no big stink. Well, maybe a little.

Secondary reason for the trip was continuity of care – for the aging flesh and bones. The only doctor I really trust stuck a three inch needle up my spine. One poked my legs with needles and wires. Another injected me with radioactive saline. Two of them gave me drugs. And Fox Rental Car Company robbed me blind. Never, ever, if they are a choice, use them for car rentals. You hear that anyone Googling Fox Rental Car? They are fucking crooks!!!

OK, I got that out of my system. Now, RVer tips. Here’s a big DO NOT: Book a flight where you need to be at the airport by 6:30AM or earlier and pick up your pet on the way back to your stored RV which is 60 miles from the airport and then drive 120 miles, 30 of which are in heavy traffic and 10 on a tiny, winding road with construction and then, and here’s the kicker, arrive at your destination having forgotten that there are no hookups! Oh, the traffic and winding road required some abrupt navigation causing shifting of even secured, fragile items. Thankfully, just some frightening noises but the human angst level was quite high. Stress? Guess! That’s all I have to say about that.

Oh, while in storage, the house batteries drained to the point where they couldn’t spark the propane for the fridge. That probably happened within 24 hours of us returning because it was still cool. We had very little in the fridge. The freezer meats were just about defrosted so we salvaged them. Cheeses were ok. Everything else, out. Not much. Engine batteries were disconnected so it started right up. Needed ice when we got to “The Birds” land.

With about four hours sleep before flying, plus a nerve wracking drive, we were wiped out and slept twelve hours. Today, anniversary number 41 by the way, Bodegay Bay is lovely and peaceful. Forty-one was once the age of old people to me. At forty-one, movie stars get lines in their faces. We get more. Men’s heads get big, physically too. Women’s boobs start sagging. Everybody’s bellies get bigger. You can’t grow enough hair for a comb-over, and you don’t bother with make-up anymore – he’ll get over it. But, I digress. Forty-one years married? So? Now fifty, that’s a fucking big number.

We putzed around today recharging and then drove 40 minutes, a very pretty ride, back to Cotati for a supermarket run – and dog food. We weren’t so sure about the stuff we got back from the dog sitter. Luna has been eating Freshpet refrigerated rolls for over two years. Spoiled. She is, and we had doubts about the batch of food on hand. She’s sick. The sitter either let her eat other than the food we provided, or she ate shit, both of which we warned against. Bad poopies last night, she slept longer than we did, and moped around sleeping most of today. She did finish the dinner she passed on last night and then went right to her bed. We’ve seen this before. We’ll have to be more selective in choosing sitters in the future. The other possibility, and if it’s true then apologies to the dog sitter, Luna just missed us. People are pretty Psycho!, appropriate word for Bodega Bay, so why not dogs?

Our first stop tonight was at Walgreen’s.

Last stop was a Safeway and, after our appetites were whetted, we brought home hot chicken.

Early to bed. Generator hours end at 10. Early for us. Tomorrow, up the coast on Rt 1 a bit.

We want to go up Rt 1 to some severe squiggles on the map to make sure Odyssey can do it. After that nasty road on Tuesday, I’m not too concerned, but if it’s anything like the section past the Hearst Castle, I might opt for Plan B.

What do you think? 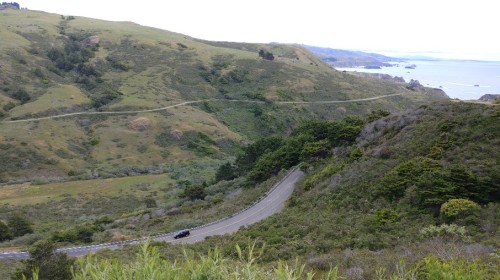 Maybe not so much for a 42′ motorhome.

You see how the road goes out onto the edge of that hill and turns (to the right from this direction)? You can’t see the Teslas and Maseratis coming the other direction and Odyssey needs to swing a little wide into their lane to avoid scraping on the right, or falling off the no-shoulder road. I don’t mind doing that – when I can see them coming, or they me. They get out of the way. And the inner hairpinss are absolutely too tight to stay in the lane.

We drove about forty miles up the coast, destination, the Twofish Bakery – it sounded eclectic. I was most interested in driving past the really tight hairpin turns and constant weaving in and out, up and down between Jenner and Ft Ross. I’ve been debating, even tonight, whether I want to do it again with the Odyssey or go back up that tiny road with construction to “the” 101, adding twenty-six miles to the trip. We’ve been on roads like Rt 1 before. They are usually gorgeous but a pain in the ass to drive. It’s not too dangerous or too difficult to make the turns, but the constant turning, braking, flooring it, and honking – some asshole at you and you at some asshole (ask George Carlin how that works) – makes it a stressful experience. Something in the RV will come loose at some point, Andrea will run back to secure it, the road will turn the other way and she’ll bump into something – anxiety will build and bubble over. It’s not fun. Much better to drive those roads in the car after you get to where you’re going.

And we did. Rt 1 along the coast is beautiful. 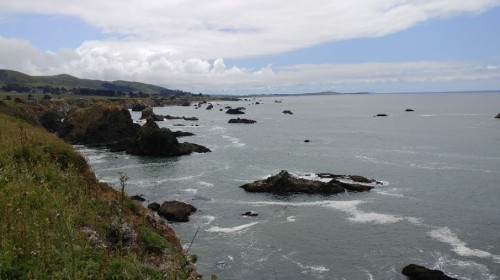 Lots of easy pullout, many for RV’s. 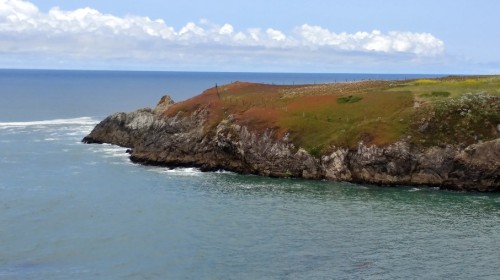 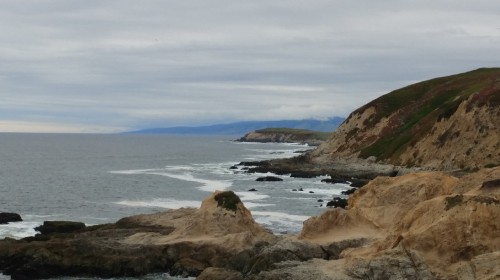 with the occasional beach, most are state or regional (county) parks.

I’ll always stop to watch the waves crash over rocks. 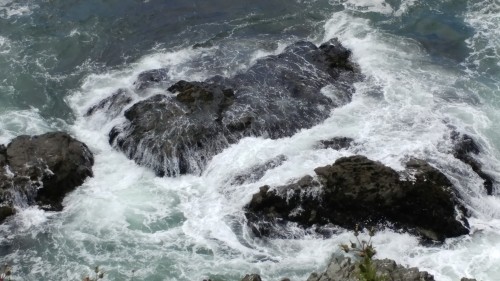 We had intended to go quickly up the highway, have a bite, then take our time on the return trip. However, I was intent on talking myself into driving the RV on this road so I slowly went around the tight turns and narrow sections, swinging wide as if I was driving the RV. And, as you can see, we just couldn’t resist some of the turnouts.

After almost over hours, we made it to Twofish Bakery, which had another name on the building. The side of it had a painting of a fish with the number 2 in it.

The yard decorations were interesting.

Below, that black thing in the middle is a burnt tree stump, after it split in the middle. The tractor on the left should give you some perspective on its original width.

Odd stuff on the California coast. 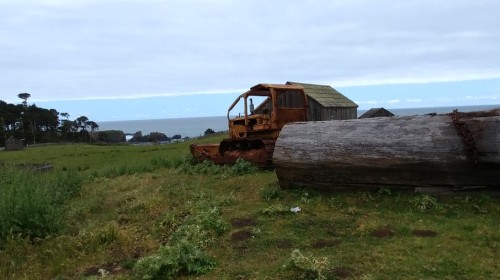 I really don’t know what the deal was with the bathroom: 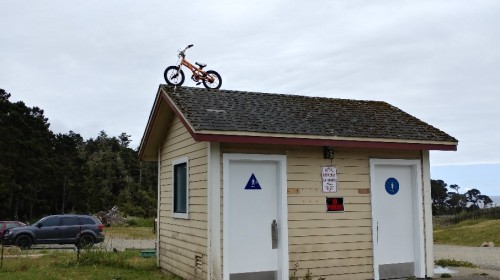 Driving back along the coast we paused a bit more for the sights.

Then we came back to Bodega Bay. First we drove into the “town” area – Andrea wanted pictures of The Tides Inn, where they filmed Hitchcock’s ‘The Bird’s, and then I wanted to stop at The Pelican Deli where they had these cool flowers out by the road, Rt 1:

Finally, we went by our rv park to the end of the road, the peninsula out to the ocean. Some pretty looks from out there.

The bay and the beach: 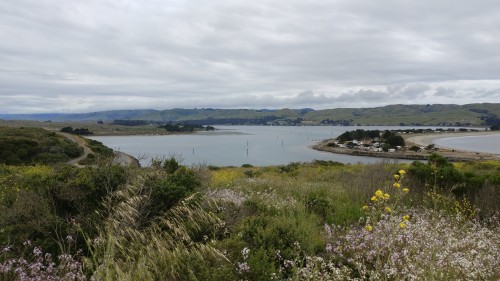 That’s not our rv park down on the right – another state beach. We’re behind the trees on that strip of land jutting out in the water from the left.

This is Bodega Bay from our rv site – at very low tide, so low, boats can only go in and out at high tide.

This is this morning, when I first got up, looking across the bay to the hills: 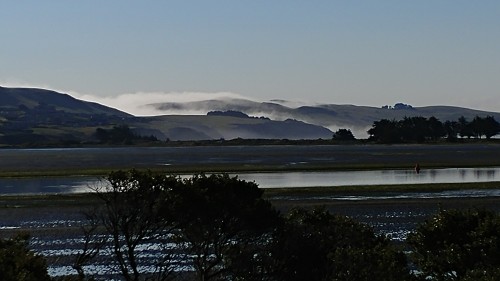 And here we are, about to head out to Fort Bragg.

I finally decided to chicken out and take the 101 to Willits and then left on 20. We shall see.

One response to “Bodega Bay”