(Crosby, Stills, and Nash – start singing. Come on, get in the mood)
It’s been a long time comin’
It’s goin’ to be a long time gone

Go ahead, I won’t be insulted if you pause me for a couple of minutes. Go on, find that sucker on your phone or computer (you still use your computer?) and play it. You don’t have it? Who doesn’t have the self-titled album ‘Crosby, Stills, And Nash’? Yeah, it’s not as good as ‘Deja Vu’, but it also didn’t have Neil Young. That was a talented bunch of guys – David Crosby was from the Byrds since their day one; Stephen Stills came from Buffalo Springfield (For What It’s Worth) with his buddy, Neil Young; Graham Nash, the vocalist from the Hollies (he had a fling with Joni Mitchell); Neil Young, with his buddy, Stephen Stills, you know, Buffalo Springfield – he had also been recording with his own group, Crazy Horse. I’m ok if you just put me on hold and go listen to some of their stuff. As a matter of fact, please do! Listen amongst yourself.

It’s really been a long time, like you might have thought I died. It happens. Old people die. Well, it didn’t happen, but lots did. Die, that is. Luckily, nobody I knew too closely. Condolences to you who lost loved ones. That’s all I got for serious talk.

We got back to Colorado in the middle of July and then settled in for a couple of months. All that driving took its toll on the RV, Odyssey. We have a spider shot on the windshield, far upper right, that may or may not be a $1,000 repair. Our left rear jack lifts us up to put us into a level position but it then fails and drops back down. The driver’s side slide, after some repairs, still has some characteristics of a parallelogram with a little tilt to the front. There are lots of other little thingies that need “adjustments”.

In mid-September, we drove into a repair shop, #Premier Auto and RV, in Falcon, some 15 miles east of Colorado Springs. I added the “#” to their name hoping internet searches might find every sentence that I mention their despicable name. The allure was that they had electric and water so you could stay in your RV during repairs. After two weeks they hadn’t done shit yet charged us for work done so I reviewed them on Google and told the truth – that they were filthy, lying cheats!

The next day, five people, including the owners and managers descended upon us, trying to resolve our issues, not exactly to our satisfaction, but just enough to change my review. After a few days of trying to change our minds without actually doing anything substantial, the head guy, I think the asshole’s name was Devin, decided he could not ever make us happy. He then made a deal with us that felt as though he was holding us hostage. If he fixed a couple of our items within a week, would we change our review? At that point, we just wanted to get away from the devil.

We agreed to the ransom. They did a shitty job with everything they did. We felt good about leaving, at any cost. Devin is the Devil. If you own an RV, avoid #Falcon, Colorado. The town is evil. It hosts the devil. Stay away at all costs and tell everyone you know that #Premier Auto and RV is a living and breathing manifestation of Beelzebub. Ok, maybe that’s a bit much. They are just a bunch of low life criminals.

But, I digress. We escaped after paying a substantial ransom and bolted south. One problem they couldn’t fix was a smell that developed after they brought the slide in and out numerous times. That smell, which everyone thought was sewer odor, followed us.

After the obligatory stop in Raton, New Mexico, we headed to Albuquerque, to get an oil change at #Statkus Engines, the place that made us feel like they saved us the year before, charging us $3000 to fix a $100 part. I’m beginning to think I have a huge “Sucker” sign on my forehead. After the bill for that oil change I’m sure of it. Thank you Mr. Statkus for making me believe that every RV repair shop is run by Lucifer’s armies. I hate you all!

We left very late in the afternoon into the setting sun on I-40 and stopped at the Sky City Casino before it got dark. Never pull into an RV park after dark. That’s our motto. It was another forty, fifty miles to Grants but everything there was full and too far to Gallups. Sky City has a parking lot with full hookup pull-thru’s. It was fine for an overnight stay. We’re not big fans of driving more than a couple of hundred miles in a day, so with Mesa another 350 down the road, we made one more stop in Holbrook, AZ, the OK RV Park. It’s perfect for an overnighter, say, to and from the Phoenix area. Stay a day or two and see the Painted Desert and Petrified Forest National Park. You might want to stop at Knife City, if that floats your boat. Their billboards start about 100 miles away.

The drive from Holbrook to Payson is pretty boring but from Payson to Mesa is beautiful. I’ve posted those pictures before so just go back to last year’s drive south (or the one before) if you missed them.

We ended up in Countryside RV Park, a Thousand Trails Park. They stick the Thousand Trails people in tiny sites up against a wall that backs up to South Idaho Rd, a busy one. On the positive side, the park has a few nice palm trees. This one was right behind our site.

Also too close to US 60 with an exit/entrance on Idaho creating more noise. Again, let’s find a positive. We experienced a double rainbow (it’s there, look harder)

and a magnificent sunset our first few days there. 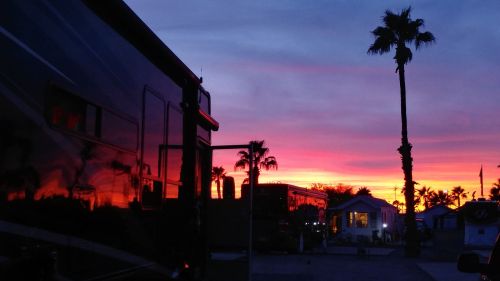 Arizona has lots of these: 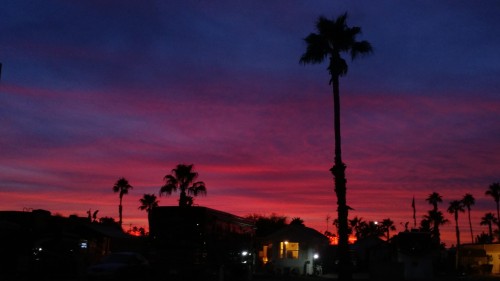 But as an RV park, it was an “only-if-desperate” for next time. Too noisy.

That sewer smell kept following us. I spent twenty bucks at a dollar store on candles and various odorific items. The RV looked like a memorial scene at times, and well it could have been. Read on.

We did a little hiking. I love the desert. Every few hundred feet another Saguaro gives you the finger. Makes me feel at home, the NY one.

We alternated between different Thousand Trails parks and a Passport America park, Carefree Manor in Apache Junction, where we participated in a Christmas parade. 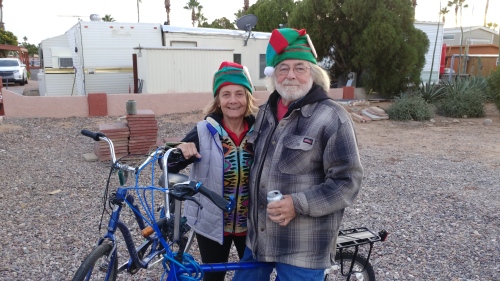 Most residents drove their golf carts, all decked out with boughs of holly (because they don’t have halls) and fa-la-la-la-la’d their way to stops full of jello shots and became jolly. Nice, older place, mostly park models, but they accept PPA all year, which, for a week, comes out to about $128.

I finally put new cables on my twenty-year old bike. I switched out the mountain bike handlebars for the hi-rise type. My back made me do it. Before the new cables I had one gear and only front brakes. Now seven gears and both brakes. One of these days I’ll figure out how the front gear changer is wired.

Right about that time, after having our black (poop) and grey (shower/kitchen water) tanks cleaned out professionally for the third time, we brought in an RV repair guy to look at our big slide problem. He was highly recommended by the professional poop people. After making an adjustment to the slide with support from a cinder block, a few pieces of wood and a car-Jack, Andrea asked him to come inside to check out our smell. As soon as Juan got a few feet in the door he said, “You’ve got a gas leak”, and went quickly out to his truck to bring in gas pressure gauges – two of them because he wanted to be sure. Both detected huge drops in pressure when turning on the oven gas. He brought in two other guys and tore into every possible place a gas line might run through the RV. Whoomp, there it is!

On our way back from the Northwest in July, we developed a water leak after the ties that kept a jumble of wires, tubes, AND the propane line to the rear heater, broke. That jumble moved in and out with the slide as it went in and out, an engineering marvel – NOT! When the plastic ties that supported the whole mess failed, the water line was the first to rub enough times against something that it split. That one I fixed. I thought it was the cold water line and the one wrapped in a metal mesh was the hot water line. Wrong. That was the gas line. Apparently, when the assholes from #Premier Auto and RV brought the slide in and out numerous times trying to understand our slide problem, they ripped a hole in the gas line as it rubbed back and forth against the rear bathroom wall on each cycle. That’s when and where the smell started. That satanic shop nearly sent us to a fiery death.

We had lit dozens of candles to make that smell go away. After an hour or so, Juan’s man, Jesus, saved us. No shit. That was his name. I’ll never doubt that phrase again. Jesus saves. But make sure it’s the guy that works for Juan. Don’t trust any other guy claiming to be a saviour.

A couple of days later, when Juan found the right part, he replaced our torn tube and let us light a match again. Holy liquid propane gas! Do you know how close we came to being blown to high heaven, or wherever it is you get blown. The lord certainly works in mysterious ways, if you believe in that shit. Personally, I’m a karma guy. Juan kept us alive and we sent Juan’s family on a Caribbean vacation. He charged us enough. I guess that’s fair. We live to tell the story of Jesus and Juan has an umbrella drink for Christmas.